Efoil drive... as a hydrogenerator

OK, so I bought a sailboat.

I was looking at hydrogenerators and they look familiar. 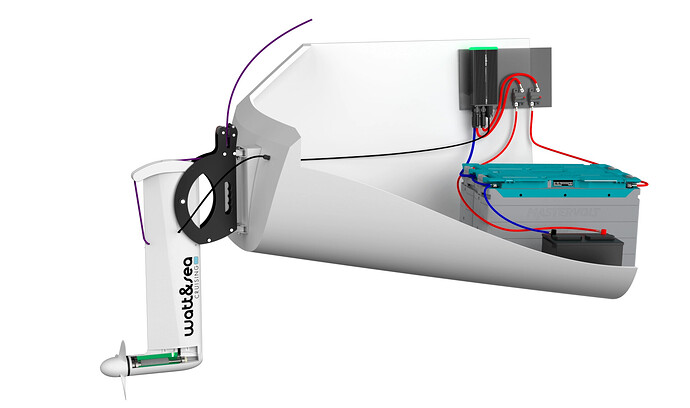 So anyway, that had me considering that I could make the same thing using hydrofoil base, modify the propeller a bit and use something like this charge controller: I was pretty amused by all the effort put into getting 300w of charging from the very expensive oceanvolt systems.

Any thoughts on a good motor for this sort of build? It seems like a fun little project.

I believe the outrunner motor will be better than the inrunner motor. Another requirement is that the coil should have as many turns as possible to get higher voltage. I could give you more advice on turbine design (blade shape, number of blades and hub shape).

I worked on a similar project last semester; Designing a hydrogenerator, but also to explore and look at the performance of setting the motor into regenerative mode to look at the possibilities to achieve a motor which could be used as a propulsion unit and as a hydrogenerator. However, in such a case one will need a propeller which can change its shape for being used as propeller in “regenerative mode” and then in “propulsion mode” - such as the servoprops from Ocean Volt.

I think the project you are aiming to do is smart and not that really difficult to achieve. As Dynamik says, you may have to get an motor/generator with more windings to get a higher voltage. Another method to achieve this could also be to use a gear to increase the RPM on the generator side. As you probably should expect the propeller to rotate relatively slowly.

An general formula used for wind mills is P (power) = 0.5Cpp_fluidDensityA_SveptAreaV³ (Cp = power coefficient), in this case not accounting for any losses, and assuming that this equation works for an incompressible fluid. Cp can be expected to be in the range of 0.15 - 0.30, depending on how well optimized your design turns out to be. The equation may give an indication on what to expected and that the possibilities for putting a hydrogenerator on a sail boat could be a smart solution for getting electrical power, especially when you are sailing and not getting any sunlight to charge any solar panels. This way be capable to generate power at night and and in cloudy weather.

However, such an upward gearing would put up a resistance that the turbine would probably not be able to overcome. I have verified this on my e-bike, on which I use the regenerative function as a brake (instead of the main brake). For example, when I’m going down a very steep hill (with a gradient of about 40°), the motor/generator puts so much resistance (high enough braking effect) when charging the battery that I don’t even need to use the main brake (even though the total weight of me and the e-bike is about 100 kg).

In other words, if gearing up to speed were used, the propeller would probably come to a complete stop in its water turbine function (or the charging current to the battery would have to be significantly reduced). Respectively, the turbine would have to be very high efficiency, but such turbines are not widely available and are very difficult to design and manufacture.