Flipsky motor on Rudder of Sailboat?

I’m planning to make my sailboat (6 tons) electric. I’ve calculated that I need 6.6kw of power tops. Now a lot of you have experience using the Flipsky F65161 100KV 6000W. My main concern would be how the motor behaves it is under water permanently and if it still holds after 1000 run hours?

Considering the price of the motor, I wouldn’t mind changing it every 2 years or mounting 2. What I don’t want is that it fails unexpectedly. Is there anybody that has enough experience to judge whether the flipsky will hold for several years in inland waters?

The advantage of a rudder mount is maneuverability and eventually drag if the old sail drive can be removed entirely.

Another question I have is about the regenerative “braking”. I know the regeneration is optimized for other purposes, and not this one. With existing electric conversion this is done by applying some throttle but less than your boat speed. But how would it behave in this case? Those existing solutions costs between 15 and 20k dollars without batteries. 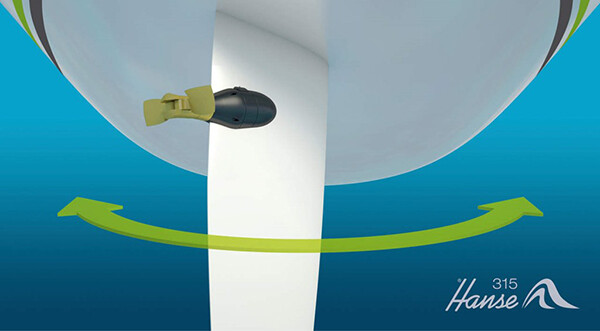 Another question I have is about the regenerative “braking”. I know the regeneration is optimized for other purposes, and not this one. With existing electric conversion this is done by applying some throttle but less than your boat speed. But how would it behave in this case? Those existing solutions costs between 15 and 20k dollars without batteries.

The regen with a VESC will put some current back into the battery, but I kinda doubt how efficient it is. Mostly just used for braking on skating/ebikes.

I have used the motor now for one year and made about 45 continuous run hours. I have a timer that keeps track of it so its not an estimation. Just now the motor started to make a bit more noise since the bearings are probably done. I assume they just use a regular ball bearing instead of the advertised angular contact bearing.

I open the motor and assumed some water got in but it was bone dry. Just a little residu of the CorrosionX that was put in when I got it. I think some oil will also do and it’s probably better for the bearings than the CorrosionX.

Getting back to your question. The motor will have a hard time delivering the 6kW you need. At 44V I run the motor at 100A and the wires get quite warm. So pushing it much harder would result in quite some heat even with a submerged motor. Having the motor run for a 1000hrs is a lot for a chinese hobby intended motor. The ceramic seal seems to hold up nicely so far but again 1000hrs… is a lot. I haven’t opened this part up yet since its pressed on the axle and didnt wanna f*ck with it. So hard to give my spion on this.

The regeneration is a really cool idea much better than sun and windmill power on sailboats. The only thing is that the motor rpm is high and therefore needs a small prop. And gaining any real power from it would require a much bigger blade. I would just give it a try when installed, all the Vesc controllers have regeneration as a standard.

If you want to give it a try, here some tips.

Hope to have helped you some. And good luck with the project.

Its possible would be better of with a different solution. You would need torque, and low speeds, even though Flipsky F65161 is probably good value, don’t think it is optimal for a heavy displacement hull. A motor with slightly bigger diameter would not add that much drag at the speed You are doing, but torque would improve.

Is there anybody that has enough experience to judge whether the flipsky will hold for several years in inland waters?

That’s clearly the difference between sailing/yachting and a board sport: there is no such motor that has been permanently submerged more than 4 hours in salt water here

Even rentals take them out of the water between customers, at worst at the end of the day.

You’ll be the first tester of a new practice.
What you could do is fully submerge a motor with a mini prop for six months in a tank and switch it on three times a week. To maximize your chances of success:

I would use a bigger motor with bigger prop and install a temp sensor if it were me.

What a great forum this is! usually I’m the one replying on topics in stead of starting them (programming forums).

What I have not told is that I consider 4 scenario’s of electrifying my boat and a rudder-mount is one of them.

On scenario 1,2 & 3 there is a lot to be found. In my case the diesel is only on for a short period of time when entering harbors, bridges and docks. and even then the motor is running idle or on a minimum load.

@Kwinty you confirm what I already was afraid of. Great to see someone has experiences matching my use case. I agree that the RPM of this motor is too high for this scenario. I definitely look for other more compliant motors. Having the bearings gone bad after so less hours is terrible. In that case the motors costs 5 dollars per run hour. I would allow 50 cents per run hour.

6KW is my top draw, only for short periods. I thing cruising would mean 3KW avg.

@XSailor. I agree, but could not find those motors until now…

One option, not that difficult probably, would be to source an old outboard, remove powerhead an replace with an electric motor. As the outboard usually have 2/1 gear ratio, you can attaché the electric motor directly to the shaft( its easy to calculate what KV you need. You can take advantage of high diameter motors and have a ton of torque. Big enough escs are now easy to find also. Probably a old 15 hp size outboard with a displacement speed “work” prop would be a good starting point(you don’t need that big electric motor though)

Just regarding using the electric motor for power regeneration: I tested some different motors this semester, also the Flipsky motor you mentioned. I can say that you will need a propeller that is optimized for that purpose (also a relatively large propeller), because the propeller blades have a lot to say when it comes to how much power you can extract. For the efficiency for regenerative, this is only high at high RPM. So your propeller blade will have to rotate relatively quick, or you have to have a gearbox (which then must be unidirectional) to increase the RPM to the motor.

Anyways, I think hydropower generators are awesome, as the available power is high if you are sailing at high speed.