I am about to start building an efoil. Thanks to this gorgeous forum I have been infected …

As a surfing newbie I ask myself if I should start with the “beginner foil” Gong Allvator Rise (that’s what Gong says on their website) or the Allvator V2 X-Over Alu (a more versatile foil according to Gong).

What’s your opinion and recommendation?

I think the 100 extra € would be well spent in the V2 X-over Alu.
Better control, stiffer setup with a tapered mast to fuselage connection.
@Manu, what’s your feeling ? Smoothness, take-off, top speed of V1 over V2 ? 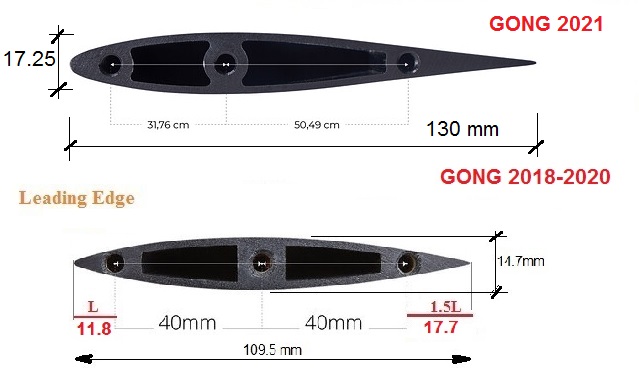 Unfortunately, I haven’t finished my second inflatable project yet, so I haven’t been able to test the Gong V2 yet.

It is also my feeling to go with the V2. It is newer and has probably more flexibility in the future.

Thanks for the profile. This is really helpful as it shows the advantages of V2 against V1.

As the figures show, the wing series delivered with this X-Over Alu edition have a thickness and volume 20% lower than that of the Rise series. Something to know is that the Rise, formerly the “Classic” was launched in 2018 (Year one). The X-over wing is year 3 model which benefits from all the experience acquired on the wings developed since (Veloce, the xT (T for Tall) series, …)

This is an AWESOME overview.
Puts facts to my feeling.
Many thanks
Best
Christof

I’d choose V2, but what size should I go? I am light weight (<70), but the foils are made for boards without all the weight of battery, motor, etc. I see that Takuma and Fliteboard have a 1800-1900 front wing and the Allvator X-over V2 in size L only has 1550 cm2.
Is that enough to get out of the water with a DIY-eFoil?
Is XL maybe too big / too slow / too boring as soon as I get “used to flying”?
Any thoughts?

At your weight I would take MT or L or LT depending on your skills. 1200 are definitely enough but dont take more than 1500.
If you can drive once I would go to the Veloce. But if you just want to buy a wing and spend more time practicing in the beginning, I would take the Fluid. But definitely with V2 mast.

Thank you - I was just about to decide to grab the Allvator Rise, which is not V2 as far as I can see, but a lot cheaper. They say all V2 front wings will fit, so why spend more than needed?

I see that Gong Kite / Wing / Surf options just mean different lengths of Mast.
And it seems that Allvator Rise Set can not change the front wing to X-over, because X-over is V2. So to upgrade you will have to buy whole new mast / fuselage / stab?! Not nice.
I find it all very confusing. Have sent them a message but don’t really expect a quick answer.

To sum your answers up:

for efficiency and speed the Fluid or Veloce. They are going towards high aspact.
For the beginning and slow driving up to 30 kph take the X-Over. With the Curve LT you do nothing wrong.
Take the the V2 Mast for stiffness
Gong generally costs only a fraction, but is not efficient.

Gong generally costs only a fraction, but is not efficient.

What do you mean by this? Trying to learn. Thanks!