I am on the finishing track of my inflatable efoil and wondering how to connect the waterpump to my 75200 ESC.

I think it should start and stop with the motor signal.

The ESC has many cables and I have no clue which to use.

My remote is a VX3 which I connected to uart2 (it seems to work out of the box).

Could you please help?

Many thanks
Best
Christof 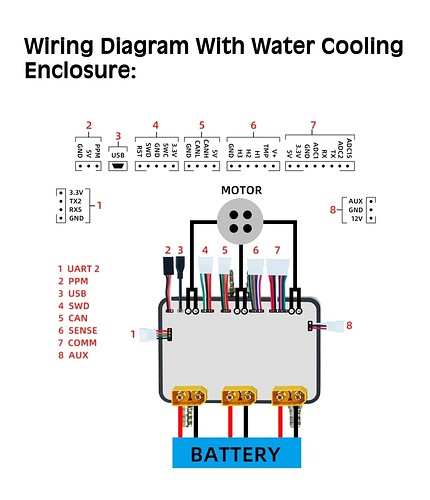 If you remove the pump and use pressure from moving, you get less parts that can fail and also solve the problem to switch the pump on and off. As soon as you move, you get water flow. Many successful builds take the water from an inlet tube at the front of the motor pod.

I will try first to set up a closed circuit of water or cooling liquid for my 12x12 system.

I will control the waterpump via a temperature sensor relay. Seems straightforward and simple. The switch costs 6 Euros.

Hi Chrizztof, waterpunp is really unnecessary weight & complexity:
The Flipsky ESCs works pretty well for approx 15min without any cooling in my setup (130kg AUW, 5kw 12s12p) before thermal throttling occurs.
With forced induction from the motorpod I never exceed 35°C - in our 120+ German/Austrian builders group everybody moved away from the waterpump setup. Save yourself the trouble, except if you expect to run 6kW+ sustained…

Thanks Foliengriller. This makes me really refraining from the waterpump. I don’t like the idea of a water inlet where the ESC is. I will buy a temperature logger to check the heat in order not to destroy the electronics.
Best
Christof

Guys, what is the minimum tubing diameter for ram pressure-driven cooling? Any info on curvature radius of the tubing in the mast clamp? Getting rid of the pump seems a good idea…

I have 4mm and 6mm without any isue…

We have an Arduino connected to the comm’s connector (TX/RX and GND).
The Arduino (with some code) is reading lot’s of data. One of it is the temperature.
When the temperature is above a set value, the Arduino will trigger a small relay what will turn on the pump.

The Arduino is in our case also used for pre charging. IE. Turning on the main relay when a set value has been reached to power the VESC, and a small relay to turn on the receiver.

Running the VESC without a pump is possible. We did it, but it will as mentioned above thermal throttle, and for us it was always at the wrong moment

The “problem” with the forced induction (water being forced into the VESC by forwards movement) is that it will only cool when you are moving! As soon as you stop, the cooling will also stop.

Interesting. For my first rides I won’t use a pump.

When I will use it, I will do it via this device:

The induction pressure is quite high if you use forced induction at the motor mount front - so any tubing will do as long as some water will trickle through - which is always the case, except when the tubing is really squezzed shut…
I now use 4/6mm vacuum tubing (more stable than silicone tubing, doesn’t bend as easily) which gives me a delta of <10°C water - ESC temperature even with modified cooler on the VESC (water in & out on the same side instead of straight through)