Has anyone used a range of power sources with a k weld, such as a supercap+psu versus using a graphene lipo? The turnigy graphene 3s looks good, as kayak31 suggested.

The supercap is twice the price of a lipo, but it won’t overheat and go puffy like a lipo might. I like the small size of a lipo, but it seems wasteful if it only does a few cycles and gets damaged/hot/puffy. I’ve read that a good lipo will push more amps than a kcap.

I’ll be using 0.2mm nickel initially, as it seems 0.3mm is more difficult for k weld.

Another option , I just took my car battery the time to spot , plenty of power : set to 9ms

I use a car battery with my spot welder too.

Sounds like I should pull the battery from my car and see how it goes, when I get a k weld.

That’s what I did. Works great.

I’m using 2 5S 5Ah Lipos in paralel. It works fully OK but the XT90 contacts as well as the Kweld probes get quite hot after 50 welds. A 3min pause is usually required.
Usually weld 2 layers of 0,3 nickel and use about 70J welds on the second layer.

I tested with the 3d printed probe holder, and had some issues with sparking, which resulted in a couple of holes in test batteries - with one battery now leaking clear electrolyte. It seems difficult to keep both probes pressed flat with the holder, so I’ll try holding the probes individually next time. I’m concerned I might put a hole in one of my p42a cells, so will have to practice some more. Edit - it’s much easier to apply good pressure without the probe holder, for consistent welds.

I might eventually build a supercapacitor power source for the kweld. What would I need to put between the boost capacitors and the kweld, if I want to protect capacitors from inductive voltage spikes - some sort of TVS? 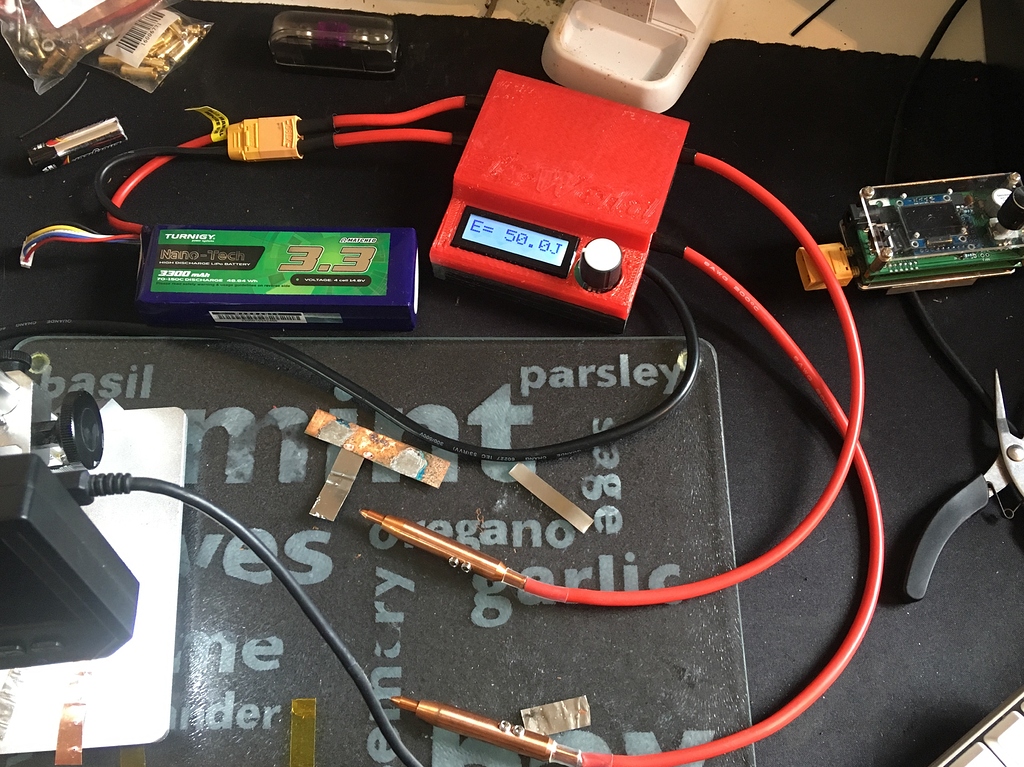 This is what I was playing with before. Was expecting to blast holes in the cell at them settings