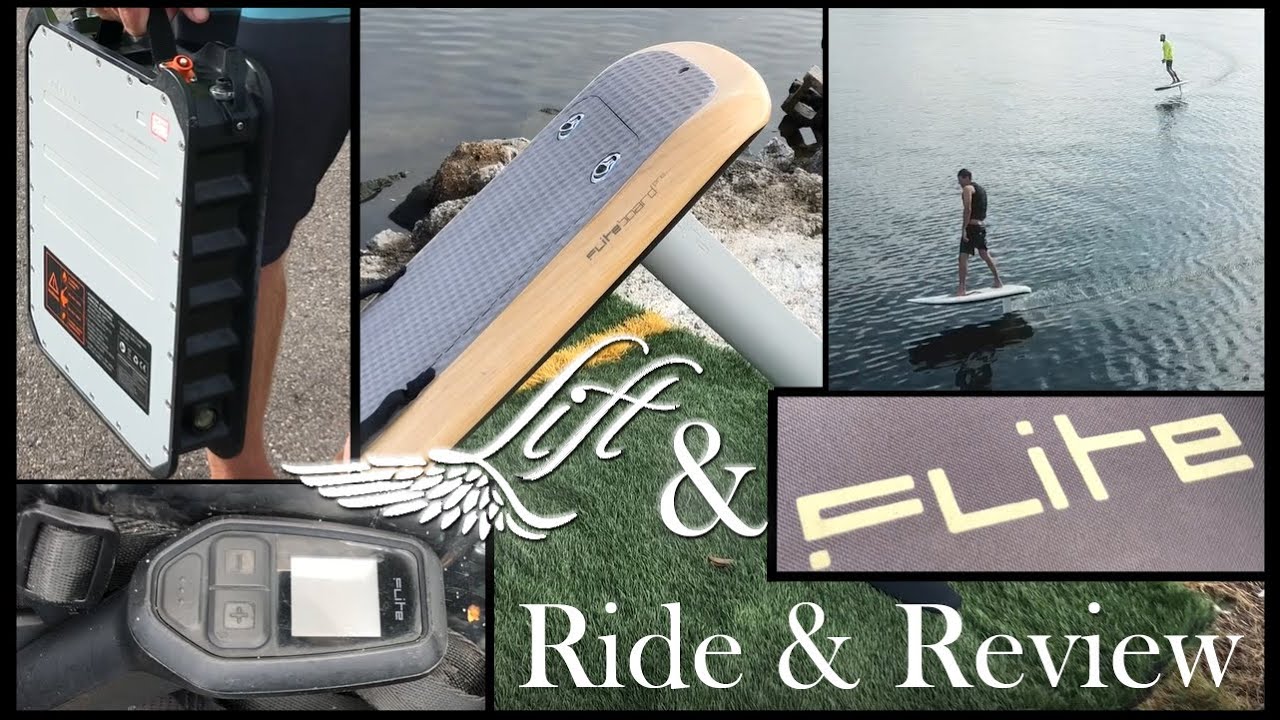 A few minor corrections in the comments but nice to see a head to head video comparing the two. Would like to see a more detailed comparison of how they ride.

A cut and paste of a guy who rides lift efoils everytime I see him out.

I am a lift guy.
Cons on Flite

Some unfair injustice on the Fliteboard. Having ridden both and more closely riding a Lift, I think they fail to make a few key points. For example, the Flite mast is aluminium because it is a great conductor of heat, therefore, having no need for the water cooling system. In addition to this, the hand controller can be a little confusing in the beginning, however, with the up and down settings, it allows for an easier cruise control; not to mention the onboard GPS, speed gauge and other various settings and information. Although they mention Flite having more bolts, I think that this is down to their fuselage system which is very common in most ‘classic’ foils, where as Lift just has two easy bolts, unless using their new HA wings which are awesome. I do agree that the Fliteboard is front heavy, but this can be adjusted with a lower shim, something they provide in their bag. I also agree with them when they say you can not tow someone, or that its virtually impossible, however, I personally think the e foil isn’t designed for this; but yes a fun feature!

I think that people overlook safety on e foils which is crazy to me. Having the more safety features is better in my opinion, especially when someone is learning. I personally know someone who has sliced a finger tendon on an e foil prop resulting them in having surgery. I also have heard of cracked ribs and have seen gnarly bruises from e foils, so I am all for more safety.

Overall, there is no question that Lift and Flite are the two best companies out there for e foils, it just boils down to preference. I like to think as Lift as a more surfer board, allowing the consumer to interchange wings which also work on classic foils which I love. I like to think of Flite as a more luxury board in a sense that there are less components and the design is a little more sleek, not to mention the hand controller functionality and ease of riding.

But I will correct and respond to a few points below. Also taking note, as we are always looking for feedback. (We do get a lot of very positive feedback from customers who have come from other brands, but the negative feedback is what we learn from!).

DT: Actually the Fliteboard system is much simpler than the competition in many ways. For example we have no water cooling pump. When we first started prototyping that was the obvious solution. There are off the shelf water pumps for ESC’s readily available. But we found they can get blocked with sand, corrode and then overheat the whole system. We also went to a lot of trouble to put the electronics in the top of the mast. This means customers don’t need to connect the phase connectors, and it means if there is ever an issue with the motor controller or control board, you can ship the mast to get fixed - and not the whole board which makes for much simpler serviceability.

When it comes to bolts, yes we do have 3 main wing bolts and 2 tail wing bolts. They don’t break, and if they ever do they have just saved your expensive fuselage and mast from damage. These bolts allow adjustability of the stabiliser with 6 shims. This is really really important for advanced riders. At Fliteboard we all like different setups, for different speeds and riding styles. A couple of additional bolts for adjustability is a worthwhile compromise in our view.

DT: We get lots of feedback about how good our gears system is. This is why Fliteboards are used in more than 60 schools around the world. Some of these schools previously used competitor boards.

As an advanced rider, I use the throttle and not the gears most of the time. Of course if you are used to a different trigger, then using our trigger will feel strange, and vice versa. Our system was ergonomically designed so you can use the trigger and buttons together with the same hand. Adding gears after the fact later with software to a much larger hand controller wont really work. The whole system needs to be designed from the outset for this system. Some people like the extra trigger throw of the Lift system. Fair enough. It’s personal preference. We feel the gears are a great system for 80% of riders. We are flying a plan under water, and wings respond best to stable and smooth power.

DT: The gears were optimised from experiences teaching hundreds of people to Fliteboard. We designed the system for smooth steps in speed, and not too many button presses. A beginner may only switch between 3 and 7. An intermediate rider up to 10. An advanced rider might by pass the gears and set the starting gear on 20 and just use the trigger. The gears also limit power, which adds to safety. And the more you limit the power the more control you have. Sure, most people wont ever get past gear 10 or 15. But thats just people we have a lot of power that most people will never use.

DT: Yes, we have an arming system. This stops kids walking up on the beach and pulling the trigger. It stops boards flying through the air into boats and jetties by accident, when people are swimming. I’m surprised that other systems don’t have something similar. Having to turn off the hand controller completely to strop unintentional take offs seems pretty strange to me.

That being said, the arming process will be customisable for advanced riders in the future via a software update.

DT: Bluetooth is blocked by water for everyone. Yes, when there Fliteboard system is armed and the power is cut, it needs to be re armed. Safety is very important for the future of our sport.

DT: We put a huge effort into ergonomics of the hand controller. (Thats why we won a Red Dot Best of the Best award, and Industrial Designers Society of America for the design). One of our goals was to make the smallest possible hand controller. We are out of the water, and don’t want to be carrying a huge controller when thats not necessary.

DT: Personal preference here. For me, it’s nice getting out through big surf or carrying your board knowing you have two free hands and the controller is not going anywhere.

DT: A few points on this one. Firstly, you can set the board up how ever you like with 6 shims. No other eFoil allows this. Secondly, we designed out system with a big focus on pitch stability. I was pretty shocked when I first fried other eFoils and found many of them to lack consistent pitch stability. You won’t see people constantly touching down in turns often on Fliteboard. The trade off for more pitch stability and roll responsiveness is front foot pressure at speed, but again it can be refined with our shims.

DT: The fuselage is machined from one piece of aluminium. Each one takes 15 hours to craft. The only plastic is a light weight cover on the bottom. Having the mast, flange and motor made from one material has a lot of advantages.

The plastic propeller also has a lot of advantages. For example it is lighter. When you spin something heavy, it creates forces which impact balance and responsiveness. We also found that aluminium propellers can be bent easily and then vibrate. They are also more dangerous. You also have more chance of galvanic corrosion between the motor shaft and propeller. The plastic propeller took a lot of engineering to get right, and a lot of tooling cost. But we think its superior to ride and worth the effort. They are also much less expensive to replace if you do break one.

DT: We do it all the time, and so do our customers! Lots of videos online towing from Fliteboards.

DT: Our standard propeller is quite high pitch. This is part of the reason we have the best efficiency and top speed. But, if you give it full power when you are not moving and have someone tied on the back, yes you can trip our current limit. You just need to build your speed more progressively. Once you are used to the Fliteboard system this is easy.

it sounds like you are just used to using a different system. We get a lot of feedback about how much easier, safer and simpler our system is from others, so horses for courses.

And of course there are many Pros to Fliteboard too. Fore example our motor placement that gives you nearly 30% more usable mast for much much sharper lean angles and turns, more stability and responsiveness.

But of course - this is just the beginner for eFoils, and there is more to come. All feedback is useful and welcomed…

Very Well written and fact based. I am missing this kind of professional behavior in this forum lately, thanks David.
Btw: I just bought one of your props recently and looking forward to test it. I will compare it to FR (aluminum) on my direct drive system. Do you mind telling me what pitch it is?

well if I measured it correctly pitch of the FB blade (at 70% diameter) has 36mm, so transforming this on 360° it would mean 273mm. so about 11´ and double the pitch of Liftfoil… and pitch ratio should be 273pitch divided by diameter148mm = 1,85
Maybe someone can confirm it, as I don´t think David will do this

The prop design is 90% based on a prop thst i iterated myself early in the project looking for peak efficiency (in conjunction with the drive train development). I printed a prop nightly and then tested about 30 props with varying pitch to see how low i could get the current draw in our target speed range. I can ride with about 20amps, and I am 90kg. Despite doing all that work, I don’t actually know what the pitch is! The final prop design for tooling was developed by a hydrodynamicist in our team closely matching the winning prototype. We learned a lot in the process, including that lower pitch props feel more ‘bitey’ when you are riding. We like the feel of a higher pitch prop because it turns more easily, you don’t really feel the prop.

I see several mentions above on front foot heavy board. Isn’t that just… you’re standing with center of gravity in a location too far to the rear…?

I mean it’s not a fault or feature of the board itself, just an adjustment needed for each board setup