Multi use E-foil hull and two deck options for DIYers

The Strider: e-foil board
Pulled the first parts out of the molds last week. I’ll be posting pictures when I get time to pull them off my phone. Roughly 5’ x 3’ and weighs 33 lbs using the doghouse deck, using the flat deck it weighs 28 lbs and is between 1/8 and 3/16 thick fiberglass with two coats of white gelcoat.
D.I.Y. Hull and deck will run you between $300-$400 for a standard layup, slightly more if you want a special material.
Prototype is going to have a front steering foil shaped like a stingray. The power plant is a FlipSky 65161 100kv from banggood (great buy at $310+tax) and 15 day shipping from USA source.
This board is handicap friendly allowing you to ride in the seated position and steer without having to shift your weight…

Really looking forward to the pics! 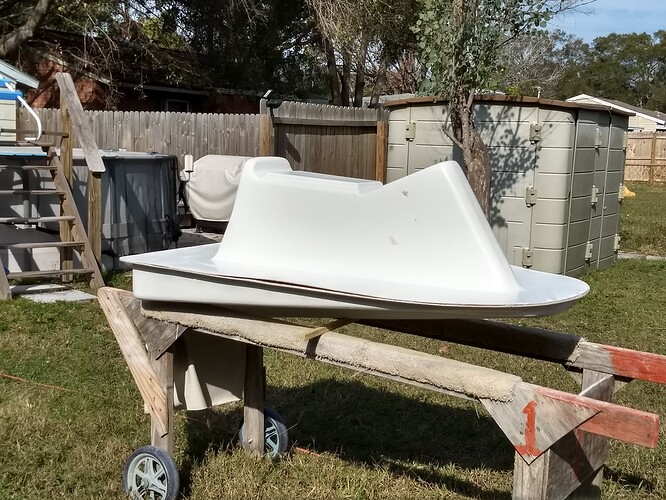 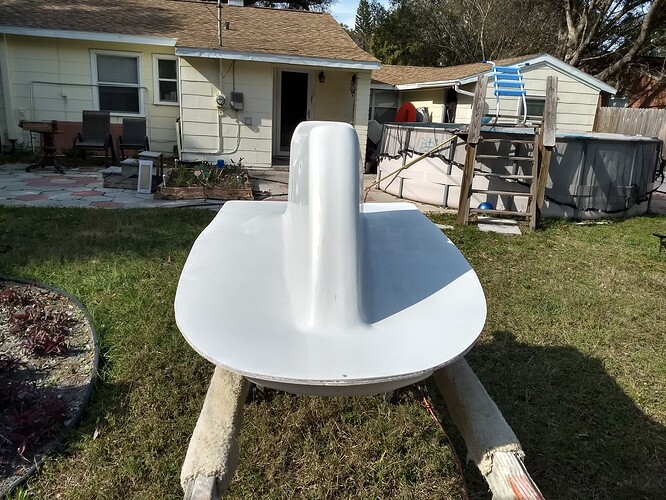 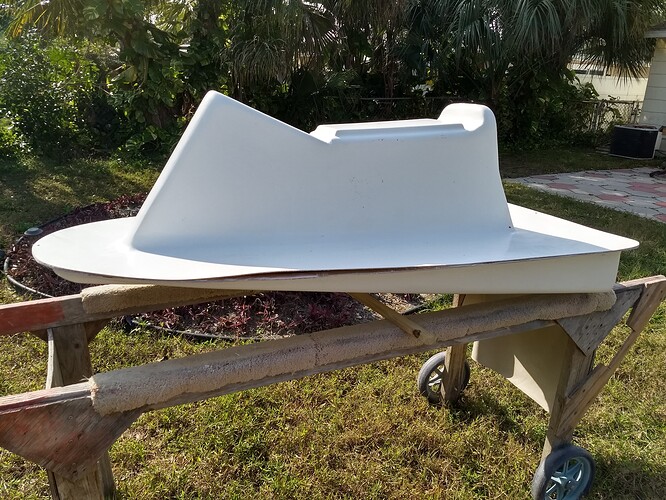 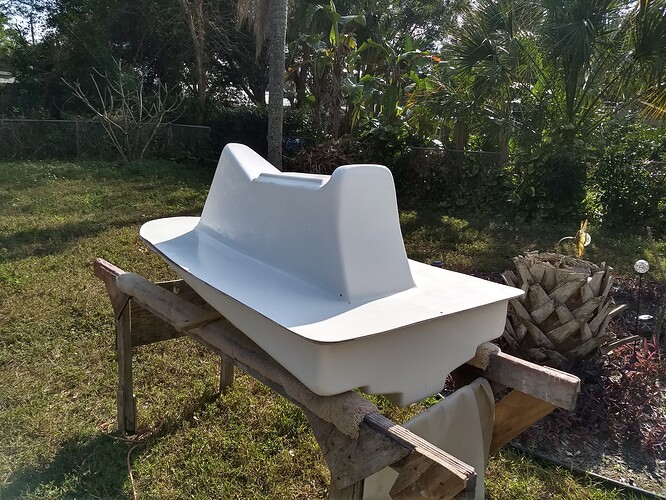 Here are the pics I promised. Think about the possible uses for this platform and the flat deck version as well.
More coming soon: Just finished printing all the parts for my 65161…

Here is the FlipSky 65161 with all the printed parts. I also have a shroud/duct for this prop setup. I have another similar prop setup to test as well… Mast clamp fits a 110mm extrusion. 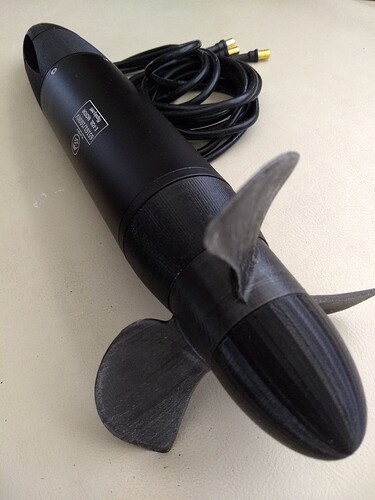 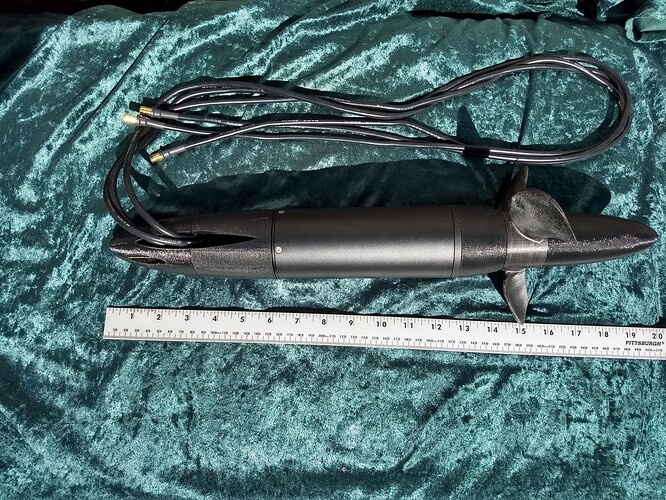 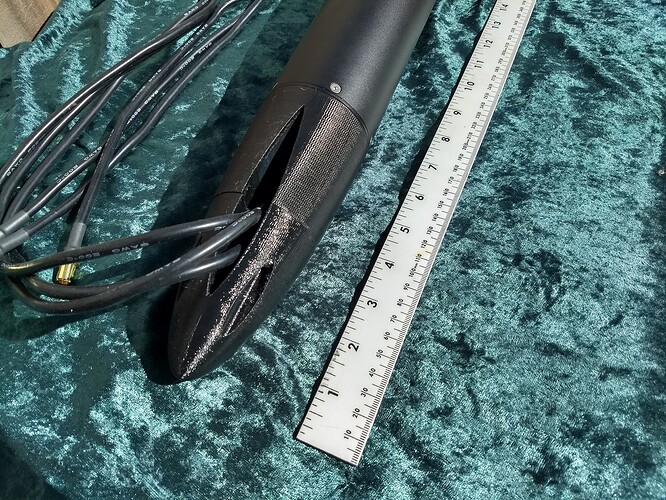 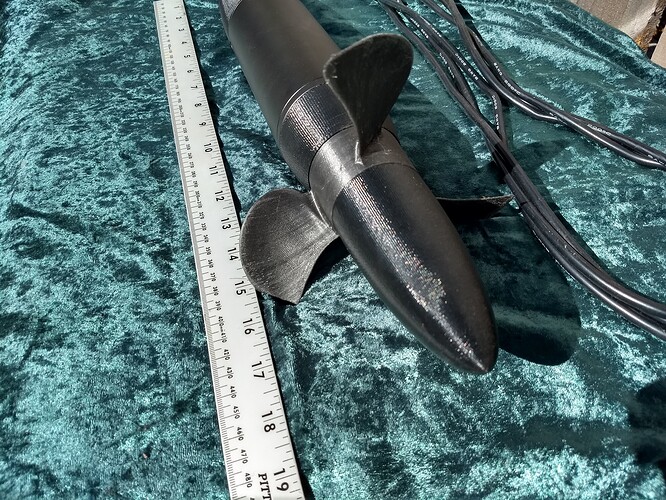 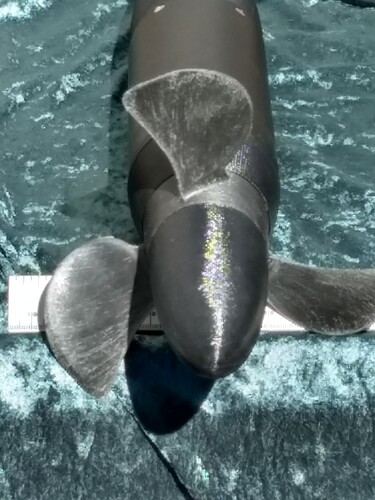 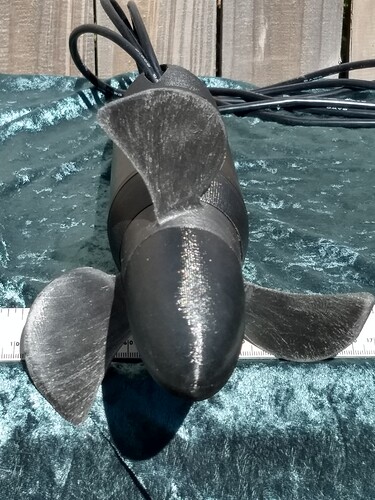 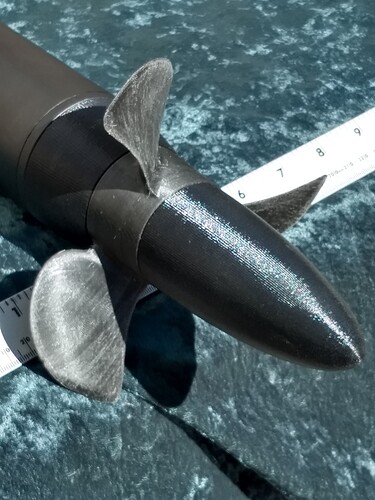 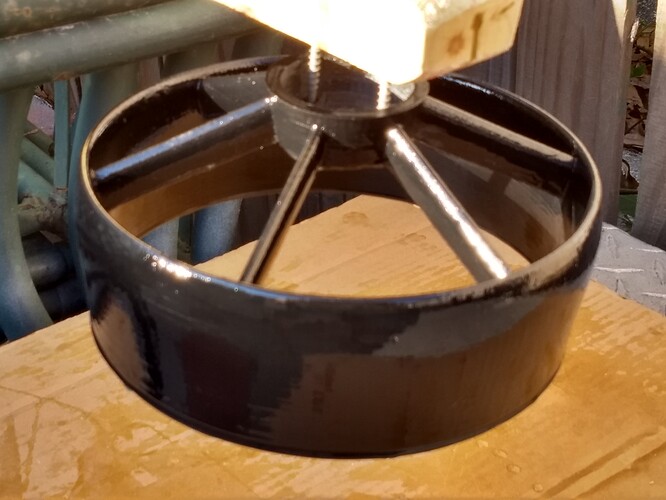 To strenghten my duct I put 3mm carbon rods into the struts (printed with a 3.2mm hole). I also added a layer of carbon to the outside to make it stronger after an initial fail. Mine was printed from ASA-X, thickest part was 6mm.

I have read here or on a similar site that the duct has a net loss of power between 7 and 12%. Talked to the folks who rent e-foils here locally and they said they removed the duct from all their rental boards. Rental fees are $300 an hour…Keep this on the down low, here in Florida there are no registrations,FL#s and nothing in the state laws that cover use of electric surf boards…Welcome to the freedom state home of 2 and maybe 3 national championship winners this year (baseball and Hockey)… All we need is the Super Bowl this Sunday to finish off the trifecta that I don’t believe has ever happened before, and all in Tampa Bay. Sports capital of Florida!!! Go Bucks!!!

No competition in the area To be fair though they rent top of the line boards and there are a lot of extras that you normally pay extra for. Prices are on the rise everywhere and I’m sure they let you ride till the battery runs out (about 90 min. fly time)…

It was a surprising game!!! The place kicker saved KC from a shutout, wow…

Almost ready for the shakedown cruise, waiting for some electronics to come in. I settled on 4 liperion 6s 22.2v at 10,000mah each, two pairs in series and paired together in parallel for 45v 40,000mah. They fit in a Harbor Freight water tight case with little room for anything else. keeping everything dry is going to be a challenge. I"m using a small water tight case for the controller that will be connected to the dashboard where I’ll plug my twist grip into. Steering controls are being fabricated today (I hope) so I think I’m about 2 weeks out for the first try/fly…

The way I understand the combination it’s looked at as a volume of power available. Series doubles voltage and the mah remains at 10,000. Parallel doubles mah and voltage remains the same. Bottom line is, more mah equals more ride time, period!

A much better way to compare relative size of batteries is through Watt hours, not mAh. If you have two 500 Wh packs, no matter how you combine the packs (series or parallel) you will double the watt hours to 1000.

The lipo batteries I’m using are 6S 22.2v 10ah with a discharge rate of 12c nom. and peak of 24c and will accept 5c charging rate.
That’s a discharge rate 120A nom. and peak of 240A and will accept a 50A charging rate for each battery. Watt hours appear to be 220wh per battery until you factor in the discharge or c rating 2,640wh (220wh X 12c=2,640wh) nom. And 5,280wh (220wh X 24c=5,280wh) peak.
Did I leave anything out?
It’s all simple math if you know what a c rating is and if your battery builder is honest about their ratings… The size of the wires and connector size are good indicators of c rating if the builder did not supply one…

The c rating has nothing to do with the watt-hours of the battery. If they’re 220wh per battery, they’re just that.

A handy comparison is to compare a battery with a tank of water. Voltage is the pressure in the tank. Current is the flow rate out of the tank. Watt-hours is the volume of water. Amp-hours is another way to describe the volume (flow rate for a specified amount of time). And the c rating is the size of the inlet/outlet (how fast you can get water into or out of the tank).

Your correct and shows me I need to stop posting when I’m half asleep…
The 220wh per cell times 6 cells per unit and 4 units = total wh.
220wh X 6 = 1320wh per unit X 4 units = 5,280wh total available.
Funny how the numbers ended up being similar.
Another thing to factor in is we will only be using 1/3 of the available capacity until the battery hits approximately 30v and can no longer keep you up on the foil for lack of RPM.
The average builder won’t delve into battery building but will rely on those in the know.
It’s the old saying: you don’t have to know every part of a phone to make a phone call…

That’s still not quite right. The watt-hour listed for the battery already facors in the cell count.

Didn’t notice any watt hour rating on these batteries.
A 6s battery multiplies V X 6 so each cell would have to be 10Ah because the Ah stay at their original value in a series connection.
Does that get looked at as 10Ah or 60Ah per battery of available volume when you compute Wh???
I think most people are more accustomed to mah or Ah and know that more amps = more ride time… I don’t really care about watt hours when I’m shopping for a battery. My greatest concern after volts and amps is the discharge rate or c rating that fits my application and charging rate of 5c or more to accommodate the use of the battery chargers I have.
I enjoyed the banter and now I must move on to the build. I expect to do the first sea trial in about 2 weeks and I’ll post battery life and performance after a couple outings…

5C battery charging?! I don’t even do that with my drone batteries during a race - maybe 2-3C. But if I have time 1C is the way to go for longer battery life.

Watthours just makes a good comparison between packs that have different voltages. If I swapped out to the higher voltage battery I’m building 12s to 14S, the current draw would be less (if I was going the same speed).

For the C rating for charge and discharge - I wouldn’t go with the label especially for the peak- most are overrated and will degrade the battery over time. But for 20Ah battery pack with 12c that is 240 (20Ah * 12c), which you shouldn’t get anywhere near (maybe 100-150A trying to get on foil).