So I’ve been experimenting with different pumping techniques. I’ve been riding GoFoils NL series, 130,160,& 190. The 190 has been my go to lately in small surf with the 14” flip tip tail and switching between the 9.5” & 6.5” pedestal that effectively changes the fuselage length. For the reference of this post, I’m using the 9.5” pedestal.
I’ve struggled somewhat with high aspect wings when it comes to kicking out of waves early and pumping back out for connections. Maybe I’m just too excited sometimes in anticipation but I find myself pumping so hard with my front foot, that I push the front wing through the water and out of its trajectory. I then find myself stalling out and slamming onto the surface of the water.
Supported by a number of other posts on efficiency of foils, I decided to start testing different pumping styles. These included front foot or back foot dominance, pump intervals or “cadence”, angle of attack, pressure, and gliding
Strange, but my concentrating on pumping actually drew attention to my foil setup and adjustments that needed to be made, mostly with the mast placement and my stance with straps. Keep in mind that any adjustment made to your setup could have effect on other settings. ie: different wing size could move your balance point that will require moving your mast forward or back.
So the biggest “Ahaaa” moment has been with shifting my weight over my front knee and driving with the back foot. Sounds simple right? Well, first thing I had to force myself to do, was to stay on the ball of my back foot. When your on the ball, it forces your weight forward over your front knee. Try it right now. Stand in your surf stance and lift your back heel off the ground. You’ll immediately feel your weight shift forward.
At this point, when I kick out of the wave ( and remember, if your looking to make a connection, kick out waayyy early to capitalize on the speed and momentum to clear the back of the wave.
At this point, I’ve been accustomed to pumping really hard with a downward thrust of my front foot, then back foot pressure to pull the nose up, then pulling my knees up to my chest to unweight the board, then repeat…
This is not only tough cardio, but major muscles are being used that demand oxygen. This is way more than just cardio.
What I’m discovering is that this pumping motion is not so efficient. Both for the foil and gliding, and for the foiler.
I heard that the most efficient foil pumping occurs when the angle of the foil changes no more that 3-4 degrees. WTF?
I’ve been pushing the wing about 15- 30 degrees down and bringing it up nearly the same. A lot of work right?
Well, I decided to test out the theory.
To do this, I stopped using so much front foot pressure that was controlling the angle of attack so drastically.
I locked my front foot into place, not bending my knee, and started using a quick hopping motion on the ball of my back foot. As I hopped with a quicker cadence, I drove myself forward off my foot.
I think every wing out there probably has its own “hopping” cadence that it performs its best at. I’m this video you will see me pumping back out after kicking out of a wave. You’ll notice the drastic angles of the nose up and down before I decide to change up the technique. Then, at 00:39, I start the back foot hop. The board levels out and speeds off with tiny back foot only hops that took very little effort or energy. After pumping back out that far, I’m usually out of breath, but that pumping allows you to recover very quickly on your connection wave.
Check it out and post your experiences.

That’s some efficient pumping right there! He starts up at the top right of the frame for anyone else wondering which one is him in the beginning.

I love pumping where the board stays flat. The big up and down pumps help when it’s slow. But you can carry speed if you just keep the board super flat on the pump and “jump rope” as opposed to “deep knee bends”.

Have you tried to take your back foot out of the straps like clinton just started experimenting with?

You have any new tips steamroller? You must be able to to tons of experimenting with two Oahu trips near back to back.

I’ve had the best luck pumping when I pull my back foot forward about 6-8" and shorten up my stance (front foot stays put). I’m using a front foot-strap, and I’m working on a new technique that works super well to get back up to speed if I’m about to fall off foil. I’ve found that if I focus on driving my front foot forward as I’m unweighting - it gives the board a little speed boost which pops it up again in just one or two pumps. Almost a circular motion scooting the board forward. Once I’m back up to speed and height I can resume efficient pumping cycles with a mini glide between them.

I think there is a progression podcast that talks about two pumping modes - efficient mode and acceleration mode getting speed to make the turn back onto a wave. Hearing that really brought a lot into focus for me and I found my own personal groove with these two modes.

acceleration mode vs efficient mode…maybe that is the zane s one … he talks about the difference in pumping a low aspect and high aspect set up as equivalent to trotting or galloping on a horse. More straight up and down with a lot of height difference vs long period sine waves, only a little movement in the middle range. I am looking forward to trying the Gofoil GL wings to experience the difference, fingers crossed I get the “aha” moment.

I think it might be the one where he has his buddy on - flyline productions, I think

Great post ElFoil, also that video is nice. That’s a long way to pump and your board is just wiggling, no big dives. It does sort of make sense hen you think of the drag and stall from a high angle of attack. But def counter intuitive. These devices are crazy and we are just getting to understand them.

Now, help us out with some strap knowledge when you can.

Foiling magazine article on pumping. Check his back foot. 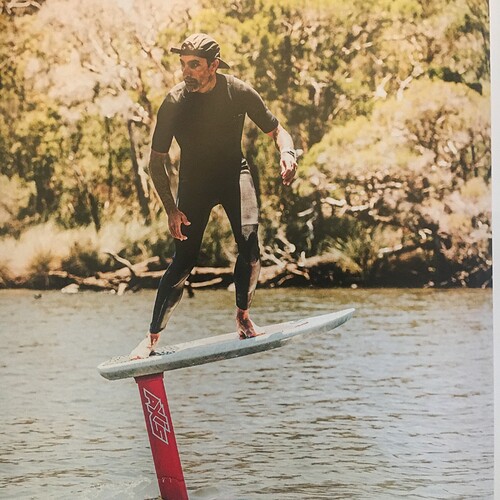