I’m about to start an efoil setup and i’m thinking to use some Lifepo4 cells that i’ve, and i’m not sure if they will be sufficient for efoil setup.

Currently I’ve 16 cells of Lifepo4 10A etch, they support discharge of 3C and 5C peak, i’m considering to purchase additional 8 cells to build 12s2p that will provide 60A discharge and 100A peak.

What do you think is it sufficient or should i drop the idea and use different cells ? What is the recommended voltage and amp for efoil setup?

i’m thinking to use some Lifepo4 cells that i’ve, and i’m not sure if they will be sufficient for efoil setup.
that will provide 60A discharge and 100A peak.

Lifepo4 will be ok in this configuration

Thank you for your reply:)

I didnt really got your point here, the Ah is based the amount of the amps the controller and the motor will consume… (the 12s*3.2= 38.4 nominal voltage and it pretty much equal to 10s of li-ion).

so… you dont recommended to work below 14s Li-ion in efoil setups? Can you please explain why ?

I skipped the 8 between the 3 and the 2 of 32v . Corrected.
With LiFePo, there is a voltage penalty: 15% voltage loss that you have to compensate with extra LiFePo cells. For our application, many Li-Ion riders use 12 to 14s (44 to 50v to produce the 4000W required by the motor and decrease the Amps drawn), along with a 12 to 14p for 60-75min of riding time (75-80kg rider).
6Ah of capacity will give you sthg like 10 min of riding time under 44V
In addition to a voltage penalty, you have your assumed Ah penalty (2p) that announce a very low riding time.
If you were using Li-Ion cells like the Samsung 30Q (=3Ah each) 2p would mean 2x3Ah= 6Ah. Some guys have purposely dimensioned their battery to ride 30minutes (12s 6p) to save a few kg on board weight. Is it your goal ?

14s is a safety working limit in water.
The choice of 12 over 14s is also guided by an ESC limitation (a few cheap ESCs can’t work with 13s or 14s like he Flipsky FSESC 200A that flashes above 55v = just above 13s full charge of 4.2v each)
LifePo choice is interesting for the 2000 charge cycles offered compared with 400-500 of some Li-IOn cells. 15% less embedded energy traded for a much longer (4 to 5x) “life” expectancy.

Whatever your choice between Lifepo4 (which Ah btw ?) and Li-IOn (the benchmark seems to be the Samsung 30Q) it will be a good choice. 2p is a dead end for an efoil use (acceptable for an esurf for rare boosts though).

Thanks again for the detailed answer

Etch lifepo cell that i got is 10Ah, so let me see if i got it right, we are talking about 20Ah in 2p and this supposed to give me something around 30min of “riding” in 44v by your conclusion.

Etch lifepo cell that i got is 10Ah, so let me see if i got it right, we are talking about 20Ah in 2p and this supposed to give me something around 30min of “riding” in 44v by your conclusion.

Read whole topic or at least these posts (and few before them).

Hi!Yes we have these elements and 15 a / h.I can’t tell you how much is enough yet,we are still in the process of building.It will be clear in a week.

It is likely these batteries will actually deliver less than their rated capacity when run so close to their c rating.

Look up how many watt hours per km people are able to get at various speeds with different props and wings and that will allow you to figure out how much ride time you will get for the setup and type of riding you are pursuing. It’s pretty simple to figure out now given all the info others have posted.

Which LiFePo4 cells are you planning to use exactly?

Thanks Vitalii, that is a great topic !

In the post that Vitali shared you can see that
Anatoli used LifPo4 cells with 6Ah in 15s4p and that
Give him around 30min. in my case 2p supposed to give almost the same Ah results i just need to have more cell in the series.

Attaching a screenshot of my cell and motor (280KV) specs. 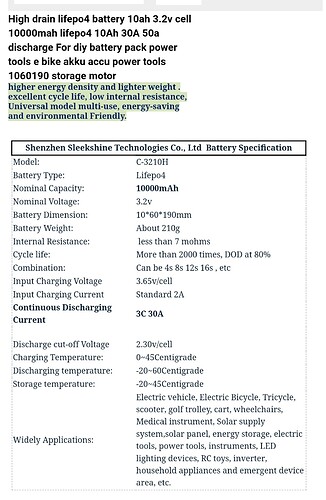 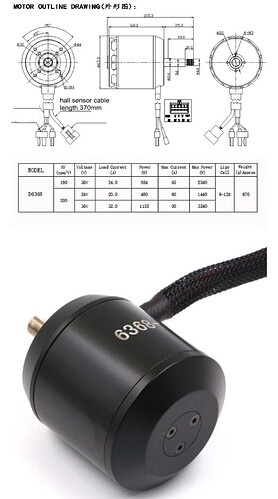 Hi! No, our build is not 4p, but 3p!Cells 6500.The design capacity is 19.5 a / h. Safely reduce up to 15 a/h. This was enough for us for 20-30 minutes, since we are still in the process of learning. And this is a lot of falls and acceleration. And the 1400 wing. On average, we spent 30-40 a/h.I think that with the right settings and experience, you can reach 20! There is online pretendenti! But if you drive at speed, it will be much more!The choice is yours!