I did my first water trial last weekend, so wanted to write it up and share it with the group. My goal was to start with an eSUP and hopefully get up on a plane. I am interested in foiling one day, so decided to get a mast and an old beat up board with a deep tuttle port. Here’s a view of the drive: First problem I ran into was weeds! But apparently trying to go weedless is a bad idea since it greatly reduces efficiency. Surprised that the commercial eSUP I tried didn’t have this problem at all, but it had a duct and I don’t. The solution was just to go to a place without weeds

I first set a current limit to 30 A which is what the motor is rated for, but found I was going way too slow (about 1.5 m/s) so decided to try luck and set current limit to 50 A, and got to about 2 m/s. I pushed it to open throttle, which got me to 7.3 kERPM. From my testing with slow motion land video, I think I have 7 sets of coils in the motor (no spec sheet, sadly), so that’s about 1050 RPM in the water. The motor is rated at 140KV so 3500 RPM without load. I got above hull speed which I calculated to be 1.9 m/s, but feels like very far from a plane. No real heat issues, though the VESC did get quite hot, and I ran the whole battery down in about 15 minutes (about as expected). Here’s some data I captured from the VESC: At this point, I’m trying to decide what’s next. Using the board as a SUP wasn’t very fun since turning was very sluggish. The motor is positioned at the very back of the board because that’s where the tuttle port is, and putting the paddle into the water to turn as on a whitewater kayak did basically nothing. So I had to come to a stop, turn, and then speed up again. Video of me going at speed isn’t that exciting, but here it is for completeness.

This has been an incredible project so far, my first foray into electric vehicles and power electronics. I want to thank all of you crazy people for being so damn inspiring.

Missing battery voltage
You ve got : Max amp, duty , erpm , GPS speed
You can calculated rpm drop , motor should run on load at least at 70% to be efficient and not burn up
When you have this value you can try other prop : with a pitch aiming for a top speed desired at about 70% of max erpm off load and different numbers, size and Area of blade
When you cannot get more erpm so more speed out of the motor with a decent sized board then you need to switch to a more powerfull motor and maybe esc …
That is the way I see it

The engine is too small!

I do not get it. Isn’t the fun of SUP’ing the P part? So… Why put a motor underneath it?

I’ve build a jet board (not a foiling board). It will go over 30KM/H, and the one I’m building now will (should) go even faster.

My jet board does not even come close to a SUP board. (it will sink when not moving forward!)

So… Skip the SUP project, and start building a foiling or jet one

you should put your motor on a fin ( 20cm max) . The mast is too long and it reduces efficiency (this mast is an anchor), too much drag. The objective with a SUP is to glide.

@JetboardCologne yes, I think I’m at about the limit of what this motor can do, maybe can push it up to 2.5 m/s with a lot of optimization.

@Kian not sure what there is to get. Going faster and using paddle to turn seems pretty fun to me. I used to windsurf, a bit tired of being in the water all the time. Water is only warm for a couple of months where I live, and I don’t want to deal with wetsuits

@momo83 Truth. I’m still torn as to what this project is. Inclined to leave it as is and just get a whole new set of gear, now that I’m more comfortable with motors, ESCs, heavy gauge wire, SSRs.

Strange that there’s this giant gap in the waterproof motors world from my relatively small 650W thing to the 6.5 KW beast most efoilers here seem to be using. Do you drive both motors from a single ESC, or do you have a dual ESC, or two separate ESCs?

Anyone have any experience with using two different ESCs? I’ve been using this smaller VESC @ 50A, but have now ordered this beefy VESC @ 200A.

Hoping to run an F5085 off each one, but wondering if there will be some kind of inevitable differences in performance even if I try to match the configuration using VESC tool. Less of an issue if I run them in in-line, but if they are side-by-side, seems like a bad situation.

Probably duty signal
Usually you put one esc in master this other in slave
( via the cable )
Working on the same battery and same throttle signal put on the master esc
They will probably pull different duty , since they are different even using similar motors
Interesting to try but adding a trouble I think

The thing you could try as well and I am very curious , matching the rotor position , coupling both motor in line and run them both with the big vesc …

I also motorized a SUP as a test of my power system, before investing the money in a foil. Just got through testing it this weekend! (I destroyed a 3D printed propeller but overall this setup worked great.) 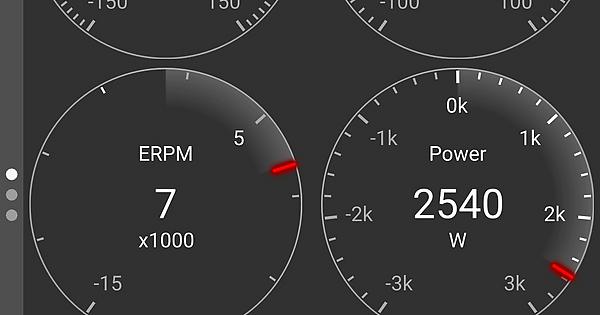 Just figured I would share these specs so you might know what to expect, e.g. 2500 watts gets you 13 km/h. Overall the system was limited by battery current, so you could push a bit more power out of 12S if you have higher drain cells.

Did you do any extra waterproofing on the motor? Any issues there? Is that the Reacher or the Flipsky 65161?

Your VESC output looks like it’s capped at 90A, so I guess that’s what you meant? What VESC did you end up using?

Did you make your own battery pack or just two RC-oriented 6S cells in series?

Lastly, is that a standard sup fin port? A bit concerned about carrying 3+ kilos on so flimsy a mount.

haha, I was wondering if I’d regret not starting a separate build thread…

Did you do any extra waterproofing on the motor? Any issues there? Is that the Reacher or the Flipsky 65161?

Flipsky; I didn’t do any extra waterproofing. I was worried about opening it up. No noticeable problems yet, but it was only a few hours in freshwater. Is the community consensus that the motor needs additional waterproofing?

Your VESC output looks like it’s capped at 90A, so I guess that’s what you meant? What VESC did you end up using?

This is Flipsky’s FSESC 200A (the one in your screenshot on the first post.) If you look at the fine print on the screenshot you’ll see the battery current at 59.94 amps. The motor current is nowhere near the limit and would go above 90 amps if the duty cycle was reduced (for instance, if there was more load on the propeller.)

Did you make your own battery pack or just two RC-oriented 6S cells in series?

This is with a DIY 18650 battery pack. It’s 12s15p of modem batteries which are really not meant for high drain and is why I have limited the battery current. I built this pack for my electric boat and this ride was also its first test. If I went out again, I would bring some RC lipo batteries so I could remove the battery current limit.

Lastly, is that a standard sup fin port? A bit concerned about carrying 3+ kilos on so flimsy a mount.

Yup. Also, the fin with is 3D printed in three parts. It’s not super reassuring but I experienced no issues whatsoever. With the motor running, the force is way more than 3 kilos.

Hi, I also looking to buy this motor for a canoe. Your number seems a little bit off, you should achieve 9-10km/h with maxim 500wats. Check William Fraser YouTube channel:
https://www.youtube.com/watch?v=6u-j1gxQRGc&t=105s

He managed to achieve 12km/h with 300W solar panels without any battery. He just put a cheap 50usd brushless motor with a 3usd 10" x 8" rc aircraft propeller.

Hey welcome to the forum Costicre.

Yeah I could see going at a good clip with a long skinny displacement hull like that Kayak. I think you’re kinda limited to hull speed with these low power motors. My board is for planing, fat and short, like 2m, but can easily have a 4m kayak and go much faster.

Quick update on this, I’m now working on a surf/foil with a much fatter motor, the 65151 everyone seems to be using. It’s a lot of fun just to surf on, but don’t have wings to try foiling yet. Also managed to do a couplete flip (well, 180 deg) yard sale after hitting full throttle while docked.

Next step I’ll need a better remote with some sort of safety in it, or ramp up mechanism.

Yes, your maxim hull speed explain the dissimilarity between projects. Maybe now you can use the smaller motor(5085) for cruising with an Kayak/Canoe and use the new one for speed and fun.

Hi again. Now I have a problem with this type of motor. As you can see in video ( https://youtu.be/VwSxpK7sR2A ) the motor in “no load” run ok with 3600rpm, 0.7A , 24.4V. Problem appear when I try to stall the motor(second part of the video). It seems to be very easy to stop this motor from running, and the current go up only to 2A compare with rated 59A. Am I missing something?

The esc probably limits the amp motor , which one do you use

Depending on the torque curve for the motor, it might not have enough torque to draw a higher current…