This is my first build of an efoil. I have a background with windsurfing, and this year learned wingfoiling, so efoiling seemed like a good idea on the windless days. Since I have limited skills in CAD/mechanical designs I had to make it as simple as possible. To keep costs low I went for the absolut minimum setup with a 6384 120kV on 10S battery, hoping it would be enough for my 105kg (with winter wetsuit). The board is a Gong Hipe 6’5 inflatable. With a volum of 170L, it is key to keep current draw at startup within limits.

I have built batteries for my ebikes before, but this time I came over a seller of lightly used packs (470Wh 36V )for e-kick scooters (only faulty BMS) that looked promising for this task, so I bought a number of these and put 4 in parallell to make a 10s16p setup with about 1600Wh of useful capacity and 100A cont current (chinese DLG/BAK 3200mAh/6.5A cells). Weight 10kg incl box made of waterproof plywood and alu plates. 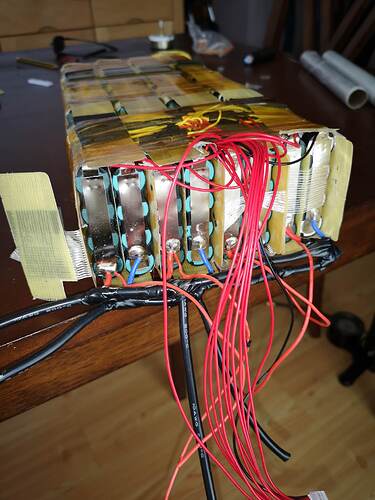 Since I put the battery in a sealed box, I needed a waterproof BMS on the outside to monitor cell balance and for over-current protection. So I went for a Daly 100A BMS, which is cheap and waterproof. It turned out that the balance function was useless because of only 30mA balance current and the cells went out of balance 0.2V after 10 charges. Also, after the first charge the BMS blocked charging so I had to charge directly on the battery. I only triggered over-current once, and with soft throttle at startup, I can do without it, and since I cannot foil when cells are below 3.4V, I dont need LVC either. I’m gonna replace the Daly with a JK BMS with 0.6A active balancing. It is not waterproof so will use it for charge only, but it is Smart so I can monitor cells from an app while charging.

For ESC I chose the FVT Seashark 200A 12S, which also is waterproof and cheap. It has watercooling, but so far the mount on the battery box alu plate has been enough (only tested in 0-15C deg weather). I bought the USB programmer, which does talk with the ESC via a program I found online, but it doesn’t change the settings , so I consider it not compatible. The FVT website is down, so maybe the company closed and it is very little info about this model so took me some time to figure out the settings, which I had to program from the remote through the “beep” menu. I havent figured it out completely as the menu doesn’t seem to match with the manual, but the most important setting is the Timing which needs to be set to the highest timing (5: Long beep). Otherwise the motor doesn’t have enough power and emitts a loud clank, like a magnet is loose, before cutting power. The ESC can also loose the setting from time to time, so I had to reprogram it at the beach. So it has its shortcommings but after 10-12 sessions it still works, so for the price and relative simpleness compared to a VESC, I am so far happy with the choice. 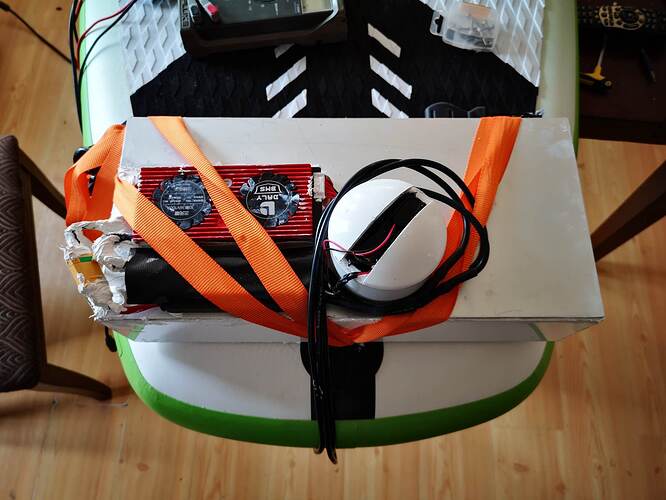 The pic shows an early setup with a dodgy tie straps arrangement that was too loose as it would move backwards on the board.I improved it by adding some 3M Dual Lock velcro under battery, adding some tie strap fasteners on the battery box and a plywood plate under the board to stop the straps from moving, as seen in the pic below. This keeps the box sturdy at all times, and board never flips during crashes. 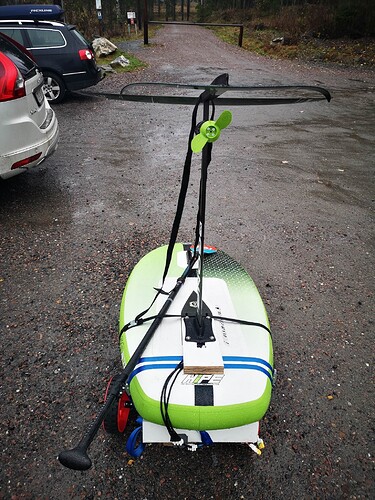 The first try I had the cables neatly taped to the back of a 70cm carbon mast , but with a hoseclamped mast mount that broke from the torque the drag was noticable and could barely get a lift, although speed should be plenty to get foiling with a 1900cm2 X-over wing. 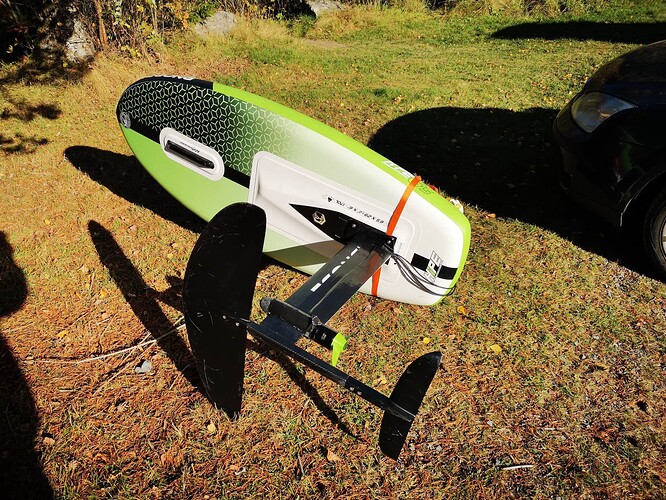 With a new clamp, now with 100% PETG infill on the back section, and cables routed inside an 85cm alu mast and a Fluid XXLS wing it was easy to get up on foil. I’ve seen people complaining about not foiling on larger setups than mine, so it is clear that drag is the problem, and having cables outside the mast is a major drag component. Based on my limited experience, a too large foil will also cause extra drag and cause too much lift to keep it in the water. I’m now on a 1400cm2 Fluid XLS and topspeed 29.9km/h on my GPS watch which is truly mindblowing from a $70 motor! The large board and low drag is the reason for this to be possible at my weight. The manouverability is quite good since there is no weight from battery etc in the front, and the volume gives me the float to paddle back if I get a motor stop.

I’ve had about 10-11 sessions so far with few issues. Season is over for now in Norway with frozen lakes. I plan to test it in salt water next season, which will probably be a challenge for the motor. I have epoxy treated motor and used original bearings which have ceased a bit now so need to replace with stainless.

So thats basically it. Thanks to all the valuable info here I managed to build an efoil that worked without much hassle. I wanted to make a post about it to tell people that doesn’t want to go down the usual 65161/VESC route, that the 6384 is a good candidate for proper efoiling even for heavy people. The tradeoff is less top speed and acceleration, but for me now it is good enough. How the motor works in the long run it is hard to say, especially in salt water, but at least for lake use I cant find reasons for it not to work for many sessions before it needs service, In any case it is so cheap that if the motor/ESC fails completely it is cheap to have spares at hand. If anyone needs more details on this setup, just ask.

Regarding the speed I wanted to push it beyond 30km/h so made a 2S16P plugin module to make a 12S battery, but motor wasn’t running smooth and I couldnt push it without dropping out of sync. Not sure why and afterwards one of the cell-groups in the 2S bank was completely drained to 0.3V (no BMS protection), so will not repeat again. Others on the forum have used this ESC on 12S, but maybe with my weight it is a little over the limit.

Finally. Thanks to all the talented people on this amazing forum! Too many to mention, but especially @V_S for sharing prop design and @PowerGlider for outrunner theory and prepping.

Great build! I love when the simple stuff works well.

One comment i have is that the main driver (at least for me) to use the 65162 motor is the absence of noise - it’s totally quiet whereas the outrunners i’ve tried have all created some noise even with smoothed stator and bell. 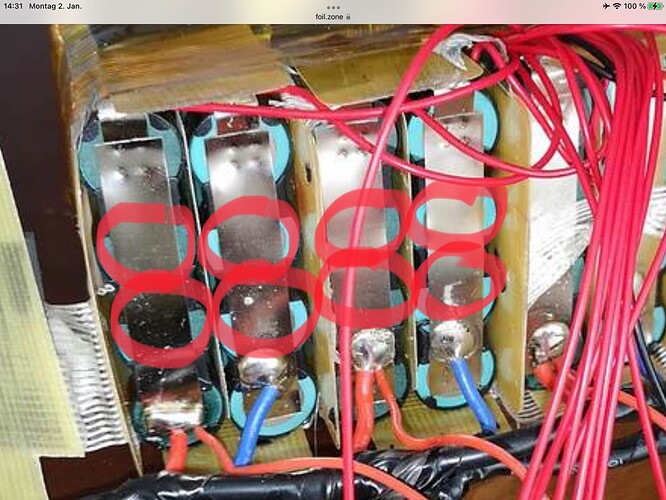 How are the battery cells in the middle connected? I can‘t see welding or soldering on the nickel strip.

There is a strip underneath that is welded. The top one is welded on after soldering the leads, to avoid heating the cells. In general these packs have good build quality with enough strips between cells to carry 25A current each. I’m gonna add one more bank to get 2000Wh and 125A current capacity.

Thanks Lars!
Me too! I’m so happy that it worked better than my expectations. I went cheap all the way and only the BMS let me down, which is not a shock to me as I have used Daly on my e-bikes and had a couple of issues when conditions are triggered, so I dont consider them good quality and only chose it for the waterproofness.

Going for a more advanced setup with custom board would mean more risk for failures. Now I have settled for less performance, but will try to squeese out as much speed as possible with bigger propellers as I think I have some headroom left in the motor that I can use for extra speed. With this board I can increase speed as slow as needed to get on the foil without pulling too much current, and once foiling I dont have to worry about overloading the components. I bought the FR 7" which looks way too big, but maybe it works.

Yes it makes a noticeable noise, but not really loud and nothing I cannot live with.

Hi I have brought the Flipsky 6384 motor with hall censor cable on it.Can I cut the censor cable off without opening up the motor?
Cheers

I cut mine (not Flipsky). Totally fine as it is separate to the phase currents.