Poor power from first build, is it components or software?

I’ve recently gotten my first build to the point where it was ready for water testing (will post full details in a “builds” topic post soon).

The core propulsion is this motor

Using the 3 blade aluminum prop that came with motor.

I’m using the VX3 remote set to 8s, which shows amps and watts.

VESC setup went pretty vanilla with detection wizard - don’t think I changed anything other than breaking current (set to 0) and inverted direction (can post screenshots, or share specific values)

On initial on-water test, I was only seeing a max of 14 amps. I initially thought maybe I had set cutoff voltage in VESC, but (finally getting to the puzzling part) when I tried in a bucket, I initially got similar amps, but as water got kicked out of the bucket, and water level went down exposing top of the prop, both RPM and amps went up to 30.

Is 160KV too high to get torque on that prop? Is 8s going to be too low a voltage to get decent performance from that motor?

I thought this combo would have more oomph.

That motor does not seem like a good choice for a E-foil. 160 KV is a little on the high side, the prop is probably 7.25" in diameter. Takes a lot of torque to spin that prop. !2 guage wires on the motor are small. The wires come out the wrong end of the motor for typical e-foil application. I would try to run it on 12S to get the best possible performance.
You might want to post the screen shots.

Thanks for the input - I’m going to start with just seeing if my 8s pack at full voltage seems to change the behavior, and maybe order a small capacity 12s test setup (I’m using a 6s balance charger, so will just do another series pack - no BMS).

Here are the VESC screen shots, I don’t see anything out of whack, but I also don’t know all the fields.

Note that this isn’t for a full efoil, but an “assist” class device - but one I was hoping to have enough power to get up on foil without a paddle (just not need to use the motor to stay there, for surf/downwind). I posted more details about the build in a “builds” topic:

First build, an assist-class device, mounted under board Builds

I wanted a surf/downwind assist class device that would be powerful enough to get up on foil without much paddle power added, but not something designed with capacity to use the motor continuously e-foil style. I’ve been able to order and build in about a month thanks to some holiday free time. I’ve been keeping a running gallery here: https://photos.app.goo.gl/ZcJgQTueWQrv15i27 (some comments in photo description). I may not have ended up with the right mix of components in this attempt, as…

First build, an assist-class device, mounted under board Builds

I’ve continued to poke away at the trial and error process of finding a prop that is optimized for this motor Initially I was trying to cut down various off-the-shelf props to reduce area to match the low-ish torque. But these all had too steep a pitch on enough of the blade that by the time I reduced area down to a point to get the RPM I was looking for, there wasn’t much thrust. I’ve now turned to 3D printing, initially just scaling down the original CC @superlefax model, but this too was fo…

OK, let’s see how the numbers work out:

I think that’s the problem there. You can (in theory) power this, I think the battery is underperforming here; voltage should sag due to this requirement to discharge fully in such a short time.

I think it’s probably underpowered in several ways but since the vesc current reading is so low then there’s the first problem. Low power in, low power out. I never tuned a vesc so i cannot help with detailed settings but i would try to set drive mode to duty cycle and try again at full voltage. 150A motor phase current (which i guess it is on the flipsky spec) should be enough to get close to the torque potential of that motor if your vesc and battery can supply it.

It seems from the screens that max motor current is set at 44A, this is not enough to power a prop this size when not on foil. Set it at 150A instead. 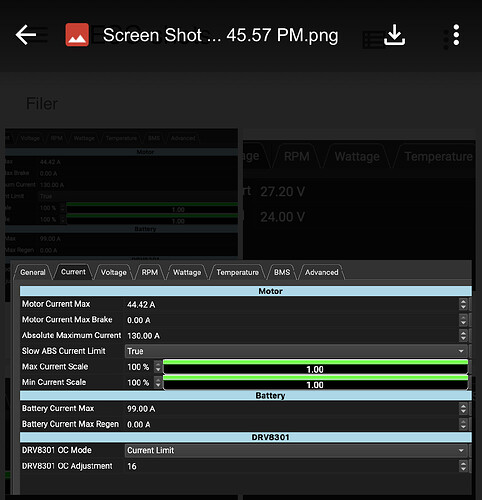