my name is Michael and i am coming from the swabian alb in south germany.
I started around one year ago with foiling. Main goal was to build an efoil but also to kitefoil and maybe pumpfoil. We realized pretty early that its not so easy to foil. So we trained a lot on a wakewinch.
As we have not so many deep water around here i decided some uncommon design goals:

My main Hobby is Paragliding so spring and summer is kind of blocked.
So i usually foil in autumn and winter.

Slowely my setup starts to work. So i decided to give something back to this awesome community who saved me a lot of time and money. And share my build with you:

The Engine is a 6384 with addons from this Thread: https://foil.zone/t/direct-drive-outrunner-with-direct-water-cooling Thx to @PowerGlider for this genius ideas.
Planned Addons there are the Igus glass bearings and at the end i gonna try a friction bearing from Igus. I dont know how much power it gonna cost me but at least i would like to try.

As a Board i use the small 47l Gong Hipe Inflateble.
The Motor is mounted to the Mast of my pretty big foil: Größere L hydrofoil Reine 3K Carbon Flügel + Aluminium rumpf mast platte Hydrofoil Folien für SUP Surf Folie|Surfing| - AliExpress
(I would not buy it again. Because its not as cheap as the cheap big Gong foils. And Gong would be way easyer and cheaper to get spare parts. So if anyone knows what foil it clones. Pls give me a hint)

The cables of the motor are going trough the mast but exit it directly under the mounting plate. Then the cabeling hangs freely around the board and enter a watertight box on the nose of the board. The watertight box contains a 120A YEP Marine ESC, a maytech reciever, a 36V → 5V DCDC Converter and my 10S4P 36V 11Ah Liion Battery (Currently: screwdriver packs).

As a Prop i use the 156 0.38 1.08 15 from @V_S. Having the right parameters for the prop was a real keypoint in my current build. It gave me more power, higher efficency and much longer runtimes. Thx Volker!

This Setup runs actually around 20min with one Battery pack. With an speed of 13-25km/h and a consumtion of around 60-70Wh/km. 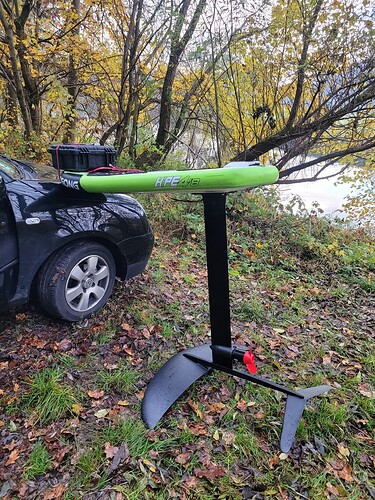 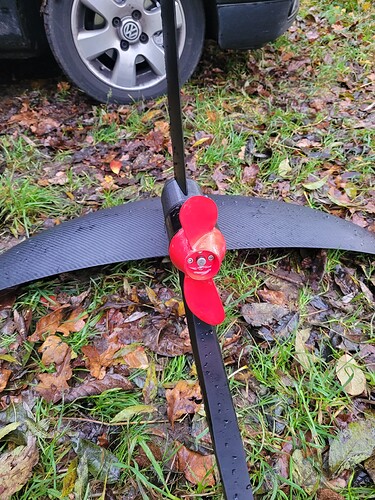 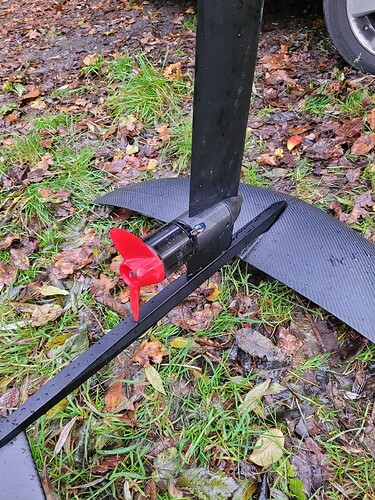 Currently i am working on a folding prop version with the wing specs of @V_S printed in PETG. The first prototype works promising but i have a more folding and more robust version thats gonna tested as fast as possible. If that one works i gonna share the .stl files here. 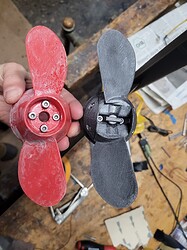 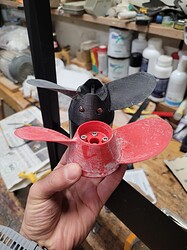 Next Proto that gets tested in the next days: 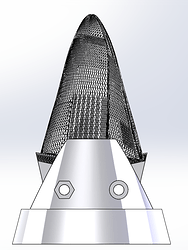 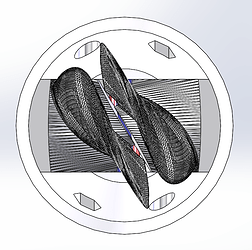 Here is a Video of my current Build:

whats your Ideas could that work? I already read that some of you tried this. But didnt mentioned what long term expirience they have with this.

.
But the ESC needs defenetly cooling for Summer. But to keep the overall concept as easy as possible. I am actually Planning to add a passive Cooling Plate on top of the Box similar to @sat_be s Build: Daniels (un)geared inflatable (slowly built) - #72 by sat_be
I think this could be enough cooling for my < 2,2KW mechanical Output power.

I made some progress on the folding prop thematic. I have now a working version that gives me ~60-70W/km at ~15-18 km/h foiling with the 6384 120Kv at 10S. And almost no drag when folded. Unfolding works almost perfect. But maybe i gonna need there some slight improvments. Also the durability is under investigation.
Its also pretty hard to balance the transfere from powered drive to glide without falling in the water ^^

I started also to make some simulations and optimize everything to low pressure and low turbulences: 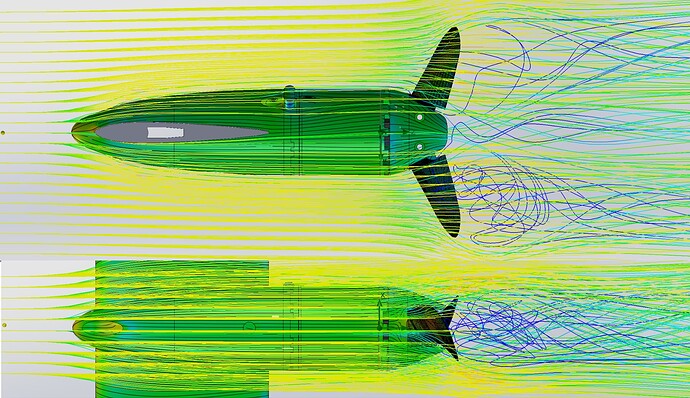 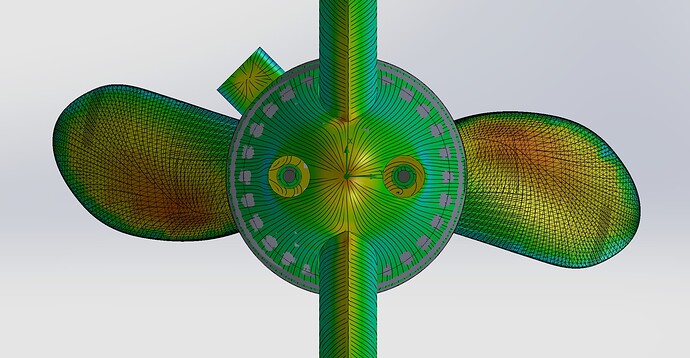 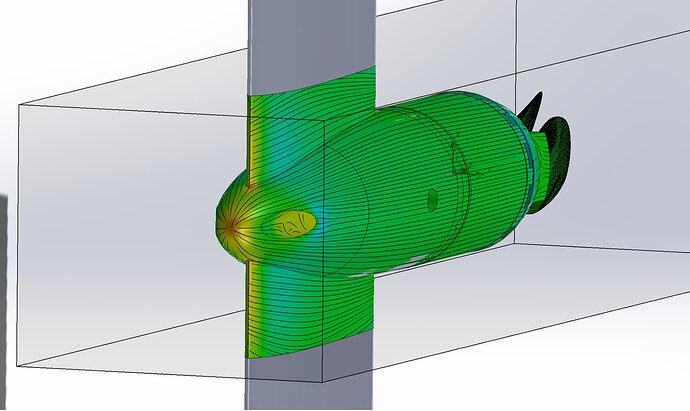 In addition i tryed to implement a debugger for the folding Prop.
So i just started to film it:

There where some interesting findings in the Video:

As promised here are the .STL files of my current Folding Prop design:
KlapppropV4
BaseV3

I printed it with PETG and very thick outer layer. You need 35mm M4 Screws and M4 Nuts.
Very important: the Prop must unfold fold just my gravity when changing its orientation. So sand it as long as it runs freely! If opening goes even a little bit hard. Its not working properly in the water and gonna have a short life. Hard openings goes massively on lifetime!
In future i probably gonna make the angle of the folding props maybe a bit bigger. So drag is higher but it opens much better. This here is a try how far back it could fold…

I am Curious about your Feedback.

It’s great that you are so active in your own prop production. Posting a proven prop in the stl sobor could help many people here significantly. However, I believe this propeller can be improved enough to be completely equal to any current commercial propeller. However, when designing a propeller in 3D CAD, one must also take into account what technology the propeller will be made with. If you go on to improve the hydrodynamic parameters of the propeller, I might be able to advise you here and there, as I have all the knowledge and equipment (really all of it).

It’s getting annoying.
Nobody wants your advice, we get along very well without it.
As always, there is no evidence that you can do anything but empty promises.
First, reveal a few facts about what you can do?

Hey, I want that prop too, it creates thrust while also acting as a generator. The holy grail of perpetual motion has been found!

jokes aside, I see that you ran some simulations. How much drag are you getting from that configuration? I mean, how much does the drag increase compared to the clean (non-powerpod) configuration. I ask because I recall someone mentioning that the drag was important and gliding, even with the folded prop folder, was significant, was severily affected when the motor is touching the water.

I was wondering if a puller prop could provide a lower drag. I know it’s been discussed before, but could not find anyone experimenting with it. My point is, compared to the size of the wings, the motor pod is not a big fuselage, so if it was possible to keep the flow attached, the drag should not be that high…

@pablo_foil i think i could simulate the drag coefficient between the motor gondel and the normal mast.
But that would be alot of work. And it does not make sens for my build at all. I gonna have it because its an efoil…

So my only goal is to make it as efficient as possible.

Today i tested my FESC 6 for the first time. Its amazing it feels completly different than my YEP120A.
It starts the engine even with very low rpm. It feels like i have much more power in lower rpm. But it feels a bit slower. But there i have to check what my logs saying.

But it gets way to hot. So i urgently need some cooling concept. So i gonna plan to add a big aluminium passiv cooler to the top of my box. Lets see if this is enough. At least it limits its own heat. Thats so lovely

Surprisingly with the VESC the transfere between Efoiling to gliding and back is just easy. It works absolutely fluently. So it looks like i am on a good way with the folding prop. The current one has now around 2-3h of ridingtime. Lets see how much longer it holds. But since now no bad signs.

As i said i made some more simulations about the perfect folding angle. This time very thin simulationmesh. So every picture here took me 6h of simulation time:

So my conclution is: i already have the perfect angle for less Turbulences and good opening.
Going more outside woul make the flow worse. Maybe 1° more to the inside would be a try but before that i would like to know the current lifetime.
So i try now how long it last. And then optimize it for a long Lifetime.