I have built a new bolt-on efoil build with several improvements to my first build. Many thanks to the members of this community for the ideas and inspiration. 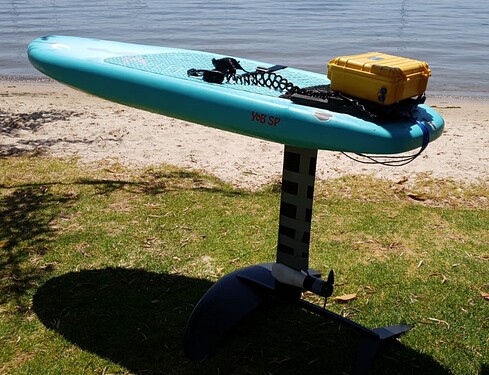 The overall goal is to have a low-cost, reliable propulsion system kit which can be easily attached to a regular foil board.

The final vision is a highly reliable self-stabilised cruiser that I can carry down to the beach and ride to Rottnest Island (20km from the mainland). My next steps are

Folding Prop
I used the same parametrically defined prop blade designed for the trusty 6384 motor, but modified the hub so the blades can fold in. Having the blades as separate pieces means they can be printed at an angle with very minimal support required. Having separate smaller pieces also make it easier to replace in case a blade breaks (happens after a while when printed in PLA). It is 185mm diameter, 3.5" pitch. 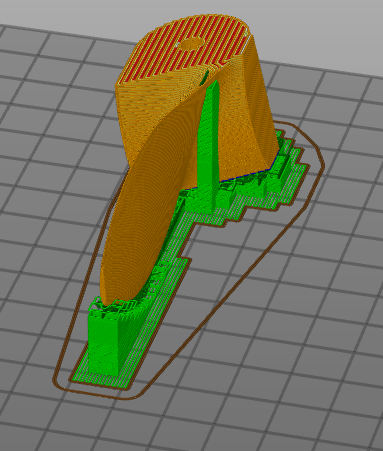 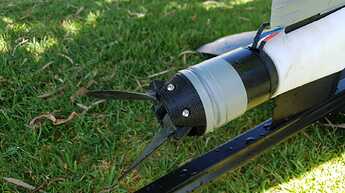 Better attachment of battery box to board with 3M Dual Lock
Previously I secured the battery box to the board with a strap, but it wasn’t that secure and often came off in the water.
I built a wooden frame and used “3M Dual Lock” which is like an engineering-grade velcro - big improvement. Make sure the prepare the surface with light sanding and isopropyl alcohol before applying. 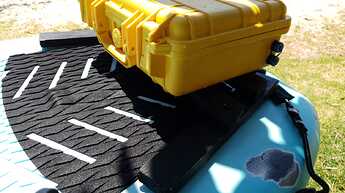 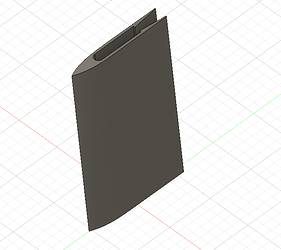 Reliable water-proof remote control
Probably one of the biggest headaches I had during testing and development was DIY hand remote control would often fail. This was a major pain as it takes a while to mobilise and get the system setup on the water, and then after 5 minutes of testing the remote contorl would fail and you’d have to call it quits.
I ended up splurging on a half-decent waterproof remote (the Erayfoil), and this has changed my life. Do yourself a favour and get a decent remote.

Water-proof treatment of 6384 motor
I have been pleasantly surprised how well the 6384 direct drive outrunner motors work, and how long they last in the salt water with a spray of fresh water and WD-40 after use. Nonetheless after a while my previous untreated motor succumbed - the bearings seized and the wires corroded.
I followed a handy video from @e-Jetter which provides a great overview of the process - https://youtu.be/x4brZwlp2A8
In summary this involves coating the stator coil, rotor magnets and wire in epoxy, and replacing the stainless steel bearings with ceramic bearings (6800 and 6900 size). Should hopefully extend the life of the motor a fair bit. 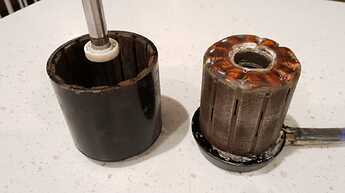 Bigger and better battery
The original battery I bought was not built very well, I built a new pack with 21700 cells. See details here: 21700 battery build 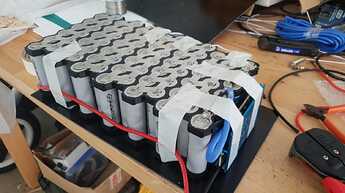 Installing a heatsink for the ESC
I’ve finally got the hang of actually riding the efoil and can cruise around for about 45 minutes on the battery, however the ESC gets quite hot and I need to stop periodically to let it cool down. I’m not overly keen on active water cooling as I don’t want to be pumping water into my sealed electronics box, so I am thinking of installing a heatsink in the box that the ESC can be attached to.

The first step is to collect some logging data (speed vs power) to understand performance. Then I will plan to test different sensors to measure the ride height (ultrasonic, pressure, etc).
Then I will test some different control strategies, such as controlling pitch and ride-height through throttle (similar in the way that a segway works). And finally controlling roll with the addition of ailerons.

Roll control using foil with ailerons
I have designed and printed a proof-of-concept foil wing with integrated “waterproof” servos to control ailerons. There are two carbon fibre spars would theoretically should be strong enough. I haven’t tested it yet. 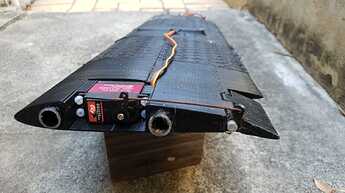 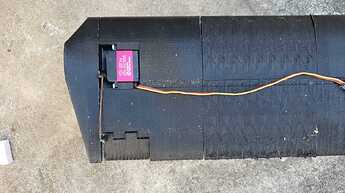 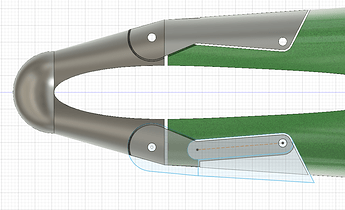 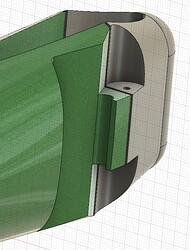 Hydro-generator
I also tried making a hyrdogenerator by printing a turbine, and building a 3-phase rectifier with “DIY kettle”. I never really got much power out of it despite seeing similar concepts that can product around 500W. It was a bit tricky testing it behind the yacht, a smaller power boat would be better to test. An MPPT module may also help. 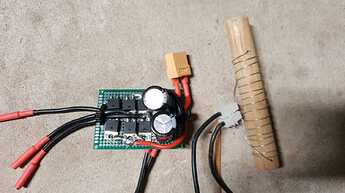 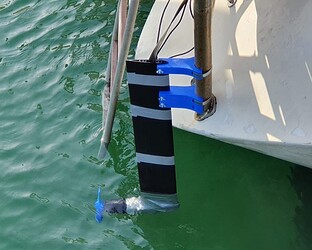 That 3M Dual Lock velcro seems almost to good to be true. How strong is it? I’m in the process of building a tow boogie and simply using velcro to attach the battery and electronics box to the board is really tempting. But then the movements of the tow boogie is a lot rougher than the efoil. You think it would work for a tow boogie?

Haha yeah it’s pretty great! It’s pretty decent, it holds the ~10kg box on when I come off the board. If you have a flat surface, and if you build a mount to increase the surface area for the 3M dual lock that would help. I reckon give it a go.