Today is a dark day in Sweden as their will not be any foiling now for at least a week…
Yesterday my 3:rd Vesc 75/300 broke, all 3 within 2 months time.

Since some years I’ve built some regular Esurf:s using the MGM 63/400 non industrial version controller. It has really taken a beating and I really run it at 15S (63V) and up to 300A. It has been submerged in water several times, but still lives although corroded badly

So back in summer 2019 I bought 2pc 75/300 Vescs when trampa released them at 600£ each. I was amazed by the software capabilities and the efficiency of FOC. I finished my “Whimsifoil” board in early June this year. The Vesc is sitting very similar to the @pacificmeister way. Same box and grinding corners to fit (i had not seen his post when doing it thought). When I saw the post I filled up with CorX as well just to be safe.
I run 14S with current limit set to 120A. Flipsky 100kv motor

1st Vesc: Conformal coated, silicon sealed cables, filled with CorX, thermal paste under heatplate. This one lasted about 10 sessions and died June 26 probably from moisture as there was some condensation on the top of the lid.
One gate driver was visibly damaged. No repair possible acc Trampa.
2:nd Vesc Was replaced same day (nice to have a spare) just put some silicon seal on wires and themal paste underneath. Got no contact with it at all. Returned to Trampa as warranty claim. Also this was rejected as “lid” had been removed for the siliconing. They are in the process of repairing this one thought without known cost. Since I wanted to ride during summer I bought a 3:rd one with 10% off as some type of consolation.
3:rd Vesc I used now 6w without hickups until replaced my 75cm AXIS mas with a 90cm RL one. During the break one phase cable disconnected (possible under light load). There is no visible damage at all to the PCB, but I just learned from @Trampa, that this is to be expected if one phase disconnects.
So I just bought my 4:th Vesc 75/300 now with 20% discount…

What is funny in this story is that my 2 Maytech remotes have never given up on me a single time as i’ve used instructions from here. Instead I get the “Maytech Experience” from Trampa, who seem very reputable and have really nice enthusiast products otherwise.

Anybody have similar experience or am I just being extremely unlucky?
Anybode know about a HV IP rated Vesc? That you do not have to open/void warranty to use in our application? Time to try another VESC like the TeamTriforce 200A one!

Wow that is realy bad. I have never had any problems with my swordfish X300A esc’s. Even my phase wires got shorted out 1 time while riding, because my motor housing was spinning in my waterproof tube. I have used it with 4 different sss motors and one flipsky 120kv all on 14s. All motors run smooth on this esc. And setup is realy simple as well.

Sorry for all your problems.

All the problems you’ve had would have happened on a ebike, or e-skateboard. The motor wire coming disconnected underload?! That sucks. The DOA VESC? Crazy. I guess test it before doing any modifications to it.

As far a the moisture failure… Moisture damage is impossible if you filled it with corrosionX. Do you have a picture showing how much CX you had in the enclosure? It needs to be filled up the about level with the top of the VESC. If the enclosure has any leaks you’ll see the CX seeping out and can open the box, clean out the moisture, fix the leak, and carry on before any damage happens.

I’m happy with mine, but yea…I’d be pissed if I had more then one failure.

Good luck with your next one.

Thanks for the Reply,

No i only sprayed corX inside and filled up 4mm on the skirt to help even better cooling.
The 4:th one I will have swimming completely in CorX with no other mods as this does not void warranty

BTW, CorX cost more than Single Malt in Sweden, so you better be right!

That’s a load of electric dollars spent! Sadly your issues could happen to almost any controller if unlucky.

Your first one stands out though, a conformal coating would normally stand up to the minimal water you describe, is the 75/300 not coated at all? (Then i’d look elsewhere or coat it myself)

Too bad you run 14s. I still can recommend the FESC 200A on 12s. It’s not perfect, but cheaper to replace

No coating at all noticed on R2 or R3 versions.
Also completely open housing alas no IP-rating what so ever, the device is sold/marked as “evaluation device” probably to avoid legislation around consumer electronics.
Nothing wrong with this, but it’s not very clear in advertizing when you purchase it for the first time.

I know some good repair guys for the vesc. If you want I hit my best guy up. He fixed for me already +10 vesc’s

Thanks Pjotr, it’s good to have a back-up!
I’ll still have to give Trampa some more time to try and repair them and see where the cost ends.

Where are you and and your “best guy” located?

I know the person who is repairing your trampa vesc

But I have another guy who has more possibilities and is really cheap. He is located in Slovakia.

He is a guy from the esk8 community. We are using the same components like in the efoil community. Create a account on the forum and send him a message. He will help you out.

What type of silicone did you use? Plumbing stuff or mold silicon?
Because the normal 1k bath/plumbing silicon emits acetic acid during hardening, which will destroy all the electronics. So you better used proper 2k mold silicon.

there are neautral hardening silicone these days, no need for 2k stuff. Can’t recommend any brand at this time, i always need to browse the datasheets, sometimes it’s described as “neutral hardening” already in the product description

Hi, had to search definition of 1K vs 2K.
I’m using 1K polyurethane (not really silicone) “Sikaflex 291i”.
It’s the go to solution for gluing/plugging below waterline in marine applications at least in northern europe, so it’s what I normally use on my boat as well.
Don’t think this has anything to do with the failures as I open the vesc before application making sure nothing ends up on PCB.

Is there a European brand of Corrosion X? An alternative with the same properties. Finding Corossion X is near impossible in Europe!

Get it from the UK…

This is where I got it from (UK shop) 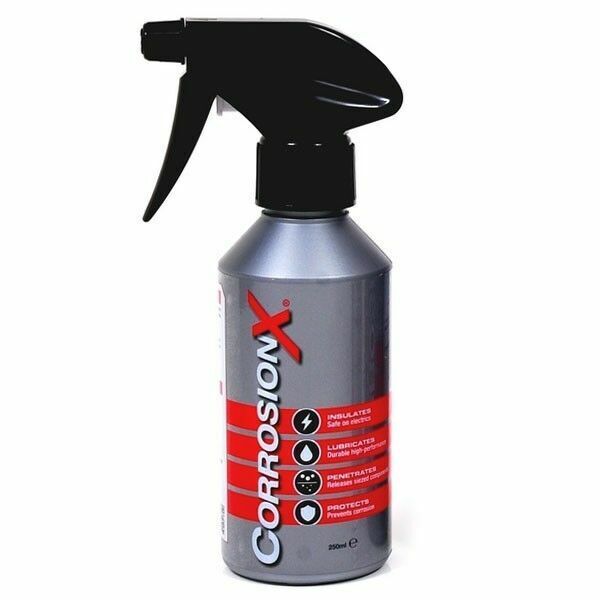 Find many great new & used options and get the best deals for Corrosion X Liquid 250ml Bottle With Trigger Cx250t at the best online prices at eBay! Free shipping for many products!

I got it via eBay.

Thanks I ordered some from this seller! Perfect!