So I found this forum earlier this year. Forgot about the time frame. So after extensively combing through other builds I decided to build my own about June 2020. Ordered a VESC 75300, 65161 Motor, and two 6s 22Ah batteries. Also ordered a Prusa Mini but they were backlogged for a couple months. I also ordered a custom board from Noah.

Since I already had Axis foils I was just going to use the Axis mast as the starting point. I was stuck in limbo without a printer for a couple months so had a motor, battery, and vesc sitting around for literally months. Once the printer came in, I designed from the ground up the motor mount. Then worked on the VESC aluminum box. Basically followed flightjunkies aluminum box build. Haven’t filled with corrosion X yet because I may choose to move some things around.

At this point everything was ready to go minus the board. So currently waiting until that is finished. So fast forward a bit and I saw Michaels tow boogie in action. I also got in on the motor order from Konstantin.

So now I’m stuck with two motors, a vesc, some batteries, and an idea to pass the time while I wait for my board. So I built a tow boogie using Konstantins motor. Took about 2 days to make. Mainly waiting for the 3D prints. The hardest part really was putting the motor back together after filling it with corrosion X.

So the first day on the water was yesterday but didn’t have the power to get up on foil. I was using my prone board with about 40L and a HS1250 wing. I got close a couple times but just lacked power. I took some measurements from my phone tucked in the control box.

So I have the motor current limit set at 120A and am wondering if I should bump this up to 130A? Also checked out duty cycle and it never really got past 80-85%. For the prop Im using is a 3 blade 143mm prop from JvdZ. Will end up trying the 165mm JvdZ 2 blade, the Jezza maytech prop, and the Racemax prop.

Also with prop changes I’ll use my 80L sup and HS1550 wing. Just to make it easier to prop up. As of right now my limiting factor is time. So far it’s been a fun side project while waiting for my board. 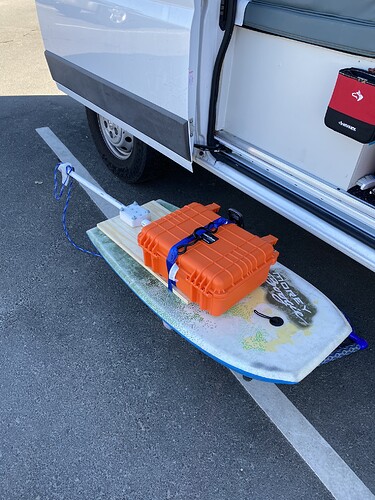 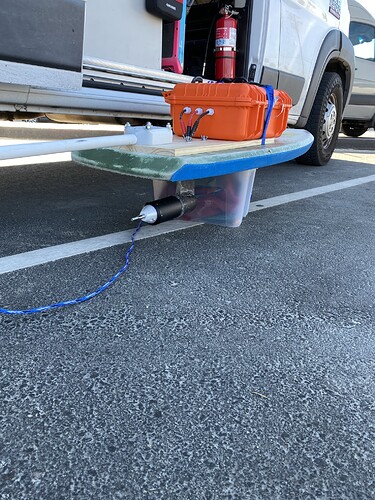 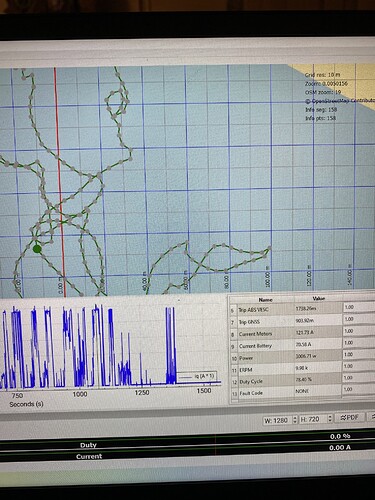 Also in the VESC setup tool is there a way to change timing of the motor? Should I keep it as is if there is an option to adjust it? 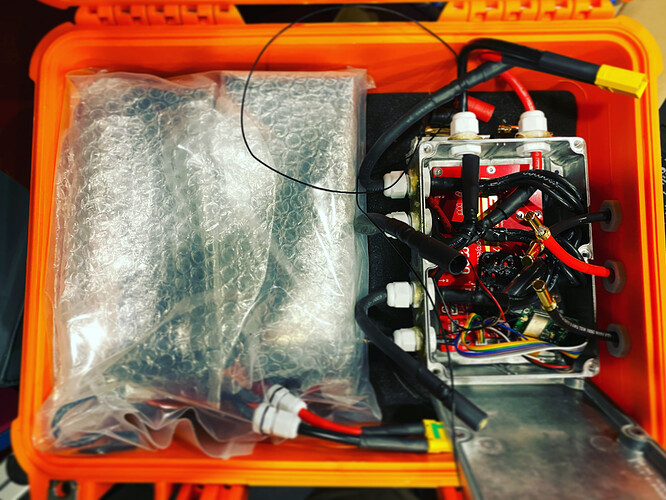 Placed the batteries in a heavy duty plastic bag. I have a white plug in which the power wire can pass through. 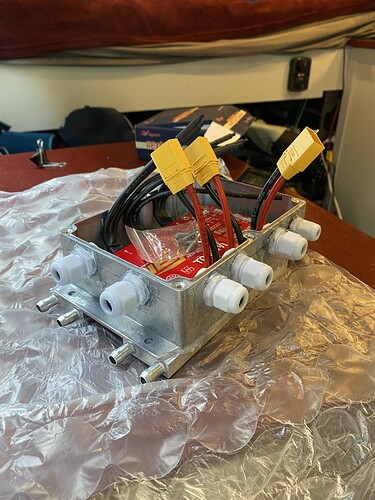 My advice stay with the 143 prop for now and bump up the current limit to 140A. But trie not to keep it at full throttle for more than 1 minute if you are unable to get on the foil. The motor will hold 140A but not for long.

that is so cool! No video? How do you plan to steer it?

There is a video of the original tow boogie in action somewhat. To steer left you pull yourself right and Vice versa. I did take some go pro footage but will post one I get more testing footage completed.

Do the two coolers under the Alu box work well? I bought two of the same type and plan on using the method your using for cooling!

Haven’t had a chance to try it in that configuration yet as it was for the e foil. Right now it’s not attached as I’m using it for the tow boogie currently.

Okay so I set the motor limit to 140A… and I got on foil! Man this thing is a blast! With my surf foil board it’s so maneuverable! Though there are some design tweaks I need to work on.

One the prop isn’t working out too well. At higher speeds and throttle there is ALOT of cavitation where the prop just creates a ton of bubbles and I have to cut power until the bubbles disperse. So Need to look for a different design.

Second, I need to find the optimal placement for the control box. With plays a huge role in how well it performs.

Third, need to find a good angle for the tow connection. Too low and it creates a second rooster tail which means drag. Too high and it doesn’t track well without throttle.

Also nice to play with rope length. Short makes it fun to shop around. Long and it’s fun to do large carves. 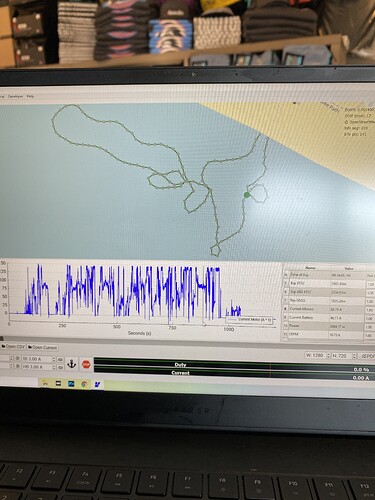 So starting with motor current. Still hitting 140amp and I think I can still bump it up. 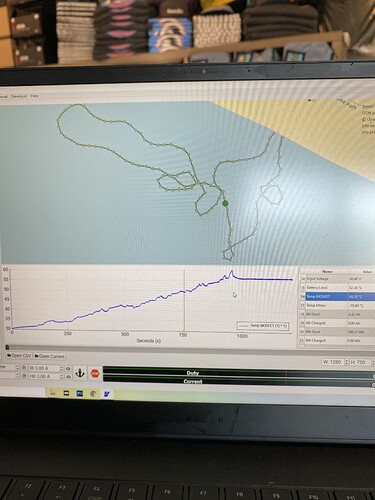 Heat on mosfets is at most 50C without any corrosion x in the VESC box. 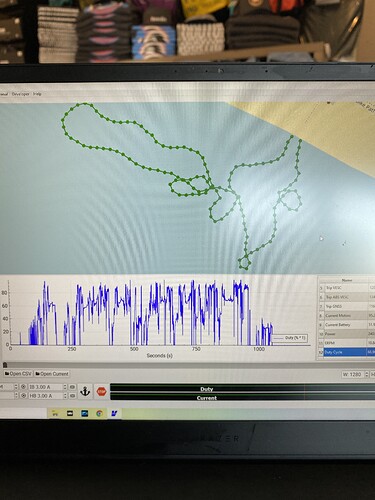 Duty cycle isnt really going consistently higher than 80%. So does this mean I should go to a bigger and higher pitch prop? What correlation does duty cycle play in choosing prop diameter and/or pitch?

Also a video of my first time getting up on the foil with the tow boogie and some footage from today with some weight changes. A bit too drastic of a weight change is it kept wanting to veer right. 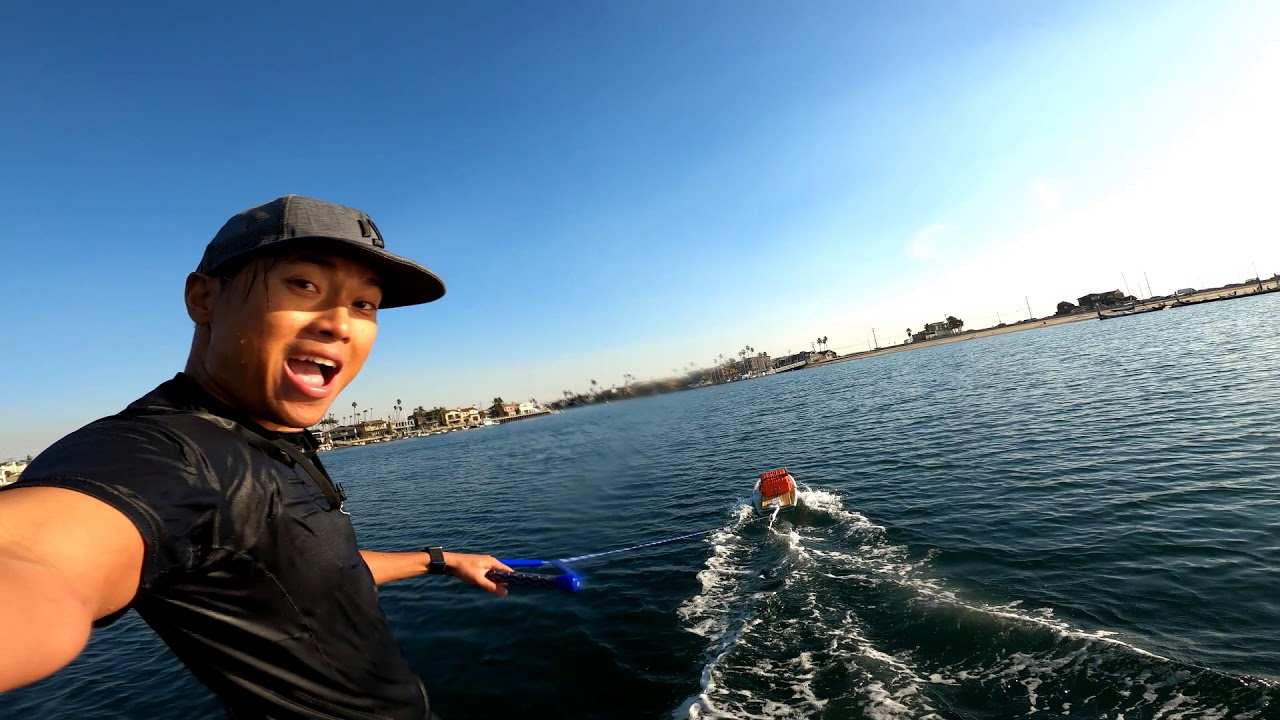 The way is see things ( and you can correct me )
Pitch will give you speed , but you need high duty so high rpm
Diameter will give your more thrust for start
At some point you need both as the speed increases will you need more thrust ( drag)

80% duty is probably due to the 140A limit set , so if you get the speed you want you can try to lower the diameter to decrease the amp draw on the motor ( and you will hit the 140A limit at a higher duty )

Pitch and/or diameter increasing , duty will decrease mainly because of the amp control for the max setting and this is not bad , I will save your esc as and motor working under load has a lower rpm or the setup is not correct , so how low ? 75% may be …

So 80% is correct with 140A
I would suggest to set all the other things ( box , angle … ) to see if you can go above this duty before playing with pitch /diameter ( endless)

You can try to lower the pod as well for less cavitation due to the board or may be put the box more in front ?

Congrats on your liftoff!

I think you should aim for a bigger board for the tow boogie. The more boyancy you have the less water you need to displace.

Generally I agree with @Alexandre go with smaller props for higher duty and probably puting them deeper is a good idea.

So did another test run with the box in a much better position. So cavitation is basically gone. Rides really nice so far but amp draw is significant. The only remedy I see is to make it more boat like (deep hull) which well defeats the purpose of it being simple. There is a ton of area on the trailing edge that touches the water. I was thinking of making 3D printed stepped hull attached to the board. Try to reduce amount of contact area to the water. Right now max speed is only 11-13 kmh. Maybe even try cutting a part of the tail off to make a thinner trailing edge.

I think I’m going to try to reduce the size of the props to get some higher rpm.

Move to a 160mm 4" pitch prop.
The prop you are running is not able to get to max RPM because the motor doesn’t have enough torque for it. Reducing the prop diameter will also make it way less efficient.

I’ll definitely try out a 160mm prop! I’ll look through the prop share page for one. In the mean time I went back to the 143mm JvDz 3 blade. Good power this morning once I had the weight balance where I wanted. I was going to try the racemax prop today but forgot it was a counter clockwise spin. With the way the weight is shifted on the board the prop would twist the board too far on its side. So will have to find a way to flip it in Fusion.

So today I set motor amp limit to 150amps which made water starts so much easier. Once on foil I brought throttle down to about 50-60%. I would like to mention I am using the Axis 1010 wing which itself is a very efficient wing. Temps on the Mosfets stayed low, about 40-50C. Efficiency on foil was hovering about 60amps.

For some reason the GPS was a little wonky. No idea why.

Also took off the rear fin to see how well it tracked Also since I was in a more enclosed area I used a shorter tow rope. I think I might add another couple feet in open water but in this enclosed area it was perfect. I’m now using the tow boogie to practice my pumping which is so nice on the 1010 wing. I even attempted some around the worlds. 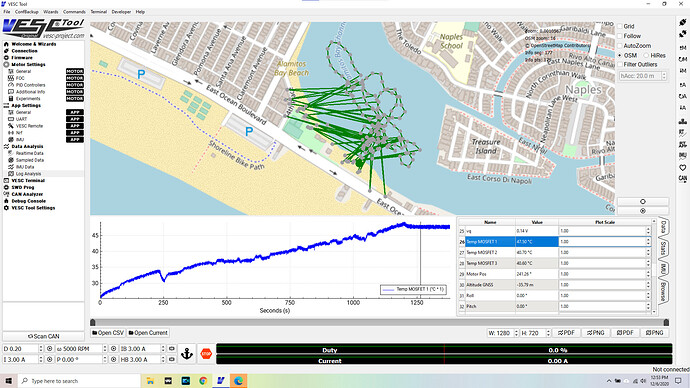 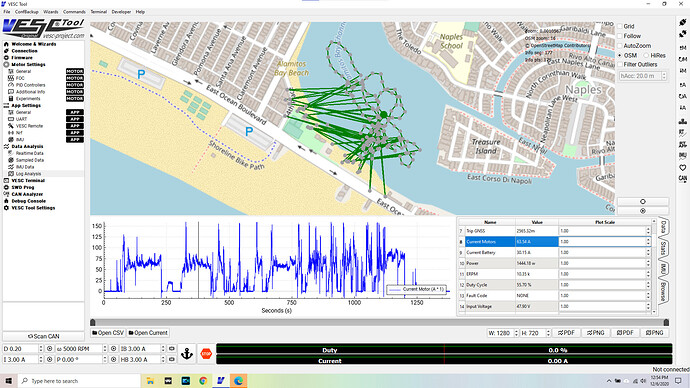 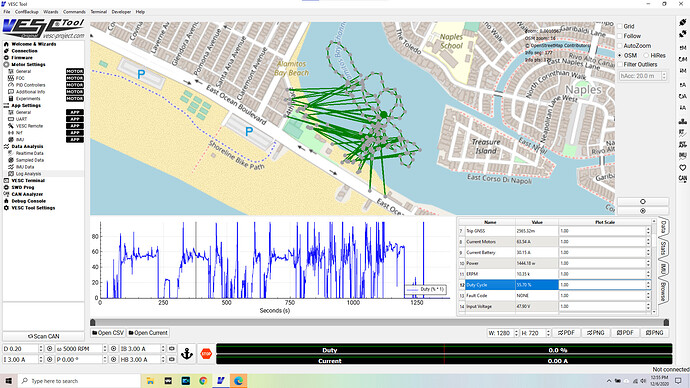 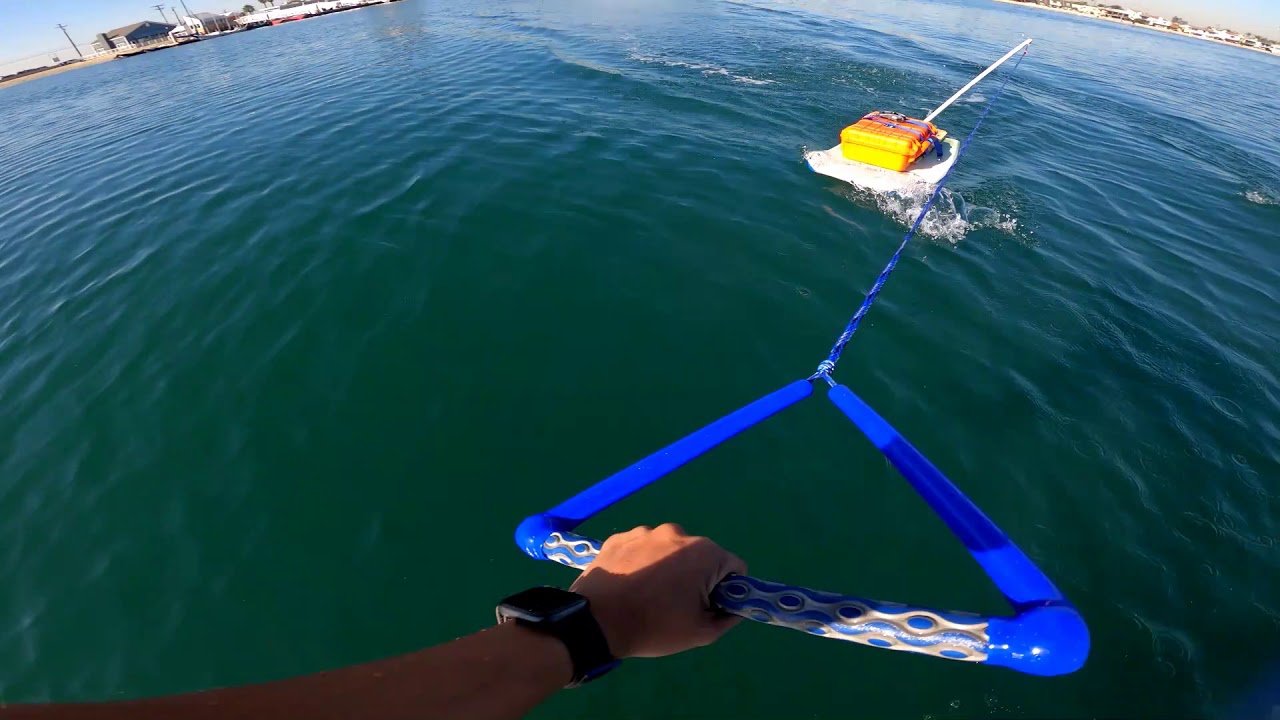 Soo interesting. That opens new horizons. Is it the same marina where PM shoot the first video ?

I used a shorter tow rope

Exploring how much space is needed to make safe change of directions without annoying surrounding crafts.
The rope is so short that we can clearly see that to turn left you must first turn right with the foil.
What do you reckon is the shortest usable rope length ? Three, four mast lengths ? With such a rope, what is the minimum width of the corridor you could make turns in ?

Depends how and where the receiver antenna is mounted. I have and extension and antenna is inside a pipe in the middle of the board. I get good reception between 20 to 30 meters. Flexible atenna outside the board can increase the distance to more than 100 meters

I’ll do some measurements tomorrow morning before I ride. But I think this is about as short as I’m willing to go, any shorter I’d lose the ability to coast without the boogie. For someone learning, a longer rope will be more desirable as direction changes aren’t as abrupt.

I did this test. Its around 10m after cutoff, however i am doing a complete new repuild of my remote. New modules, stronger range less power consumption. So basically I don’t know now.

Cool project you’re running! Thanks for the data on the prop, keep us updated

Measured the distance of the rope to be 15 feet and another 5 foot on the extended pole. The pole length I’m still playing around with to see what I prefer. I will prob go a lot shorter. Also I have an idea about towing into NON breaking waves but ill have a video on that later.

Also had a ton of fun getting to speed and letting go and just pumping around the board. Really good practice with carving and pumps. Also regarding the minimum turning diameter I was able to do pivot steering so it would be radius of that circle. Though I think that’s a more advanced skill for a lot of people. But smallest achievable turning radius will never be as good as an efoil because well… the tow rope. So far my go to wing is the Axis 1010. Amazing glide, good speed, and early takeoff.

I tried another prop today but I can’t see the log data without my laptop. Is there a way to do so on the VESC tool app? I’ll share data once I have access to my laptop again.